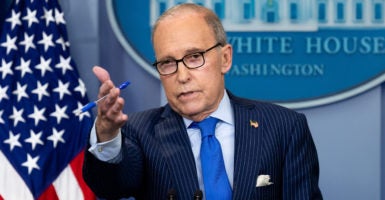 Both Mexico and the European Union on Wednesday announced retaliatory tariffs on U.S. products as President Donald Trump prepares for potentially confrontational talks with allies at the Group of Seven summit.

The G-7 gathering will take place Friday and Saturday in Charlevoix, Quebec, Canada.

Trump supports free trade, but views tariffs as a tool to get the best deal for the country, Larry Kudlow, director of the White House’s National Economic Council, told reporters Wednesday.

“Free world trade is a very good thing indeed, but it is broken, and President Trump is trying to fix it,” Kudlow said. “As I’ve said before, I think he is the strongest trade reformer in many decades.”

Kudlow said that Trump wants trade to be on a level playing field, and while other countries may have higher trade barriers, they are demonstrating they aren’t shy about adding more.

Mexico announced it would impose tariffs of between 15 percent and 25 percent on U.S. exports to its market, such as pork, apples, and potatoes, which would cost U.S. exporters a total of $3 billion.

Mexico is the second-largest market for U.S. exports. In 2017, it bought $277 billion worth of U.S. products. Canada is the largest trading partner for the United States.

The European Union also announced Wednesday it will begin imposing tariffs in July on steel and agriculture products, among other things, totaling $3.4 billion in costs to U.S. exporters.

The Trump administration, in clashing with allies, could be missing the big picture with China, said James Roberts, a research fellow on economic freedom and growth at The Heritage Foundation.

“The president showed leadership in the G-7 on other issues, such as the Paris climate treaty and the Iran nuclear deal. But on this issue, trade, he’s wrong, and they are right,” said Roberts, a former foreign service agent with the State Department who worked on international trade deals.

“If you want the West to unify the West against the threat of a rising communist China that has affirmed its commitment to communism and Marxism and is spreading its influence and isn’t playing by the rules, you don’t want a trade war,” Roberts told The Daily Signal.

However, Trump might well be looking at the long term, contends John A. Thaler, founder and portfolio manager at JAT Capital Partners L.P., an investment management business.

He said any trade war would be short, because the U.S. has such massive purchasing power.

“With Canada, Mexico, and Europe, we are trying to leverage what we can to get the best deal possible,” Thaler told The Daily Signal. “In the case of trade, our most valuable strategic asset is our consumer. We are the largest customer for practically every [other country’s exports] on the earth. … I wouldn’t expect a long-term trade war with Canada or Mexico, or Europe.”

In defending current and possible future tariffs, Kudlow urged critics to look at other countries.

“The United States, by the way, we have the lowest average tariff in the world,” Kudlow said. “And if you go down a laundry list of industries, you will see we are much lower. Our tariff rates are much lower than our competitors. So [the president’s] point is, we should all have a level playing field.”

Commerce Secretary Wilbur Ross made the same point in an April speech at The Heritage Foundation.

However, the notion that the United States has lower tariff rates than any other country is an exaggeration that fits into the administration’s political narrative, Heritage’s Roberts said.

“The agriculture industry in the United States has quite a few trade barriers. New Zealand doesn’t,” he said. “It’s part of the administration’s political message: We are suckers.”

Roberts pointed to tariffs on Japanese imports that the Reagan administration imposed in the 1980s that aided the U.S. auto industry, as well as protectionist tariffs on imports of sugar, dairy products, and even tomatoes.

“This gives the wrong message. All countries have some trade barriers,” Roberts said.

Tariffs are the role of Congress under the Constitution. However, the legislative branch over time ceded most of its authority to the executive branch.

In defense of the steel and aluminum tariffs, the Trump administration argued national security concerns.

“I reject the view that it’s a negotiating tactic purely. For example, that the steel tariffs were put in place as a national security concern,” Kevin Hassett, chairman of the White House Council of Economic Advisers, told The Daily Signal at a White House press briefing Tuesday. “The president is the commander in chief. He’s supposed to make those judgments in a time where we need to be able to produce steel.”

“The administration used national security grounds to impose tariffs,” Roberts said. “That is a stretch. Canada is not going to invade us.”

Last week, Sen. Pat Toomey, R-Pa., signed onto a bill initially sponsored by Sen. Mike Lee, R-Utah, that would require executive branch actions on trade, such as raising tariffs, to be approved by Congress.

Thaler, the investment manager, said Congress should be cautious.

“Without taking a position, the national security value of our steel industry is a viable question,” he said. “What happens in the next 100 years if the United States doesn’t manufacture steel?”

Hassett told The Daily Signal that the administration is also ready to actively address other national security concerns.

“We’re trying to get China to stop stealing more than $100 billion worth of intellectual property every year and open their markets to our products,” Hassett said. “And so there are a lot of things going on right now.”

China is part of every conversation on trade, but also should be looked at entirely separately, Thaler said.

“China is on a 100-year plan. They’re OK losing money for 75 years, as long as they’re better off in year 100,” he said. “They can do this because the government controls the economy, not shareholders. America is a capitalist country, and nobody is willing to lose money for one year, much less 75.”

“If the U.S. halted trade with China, the U.S. market would suffer in the short term, but it would be a debacle for China,” he said.

China has engaged in intellectual property theft and forced technology transfers, and Trump has taken a bolder step than his predecessors, who paid only lip service about the problem with China, Kudlow said.

“The whole world agrees with us regarding China’s trade practices,” Kudlow said. “Many parts of that world have filed their own complaints on exactly the same grounds, either with the government of China or with the World Trade Organization. Our president has taken action—strong, decisive action.”