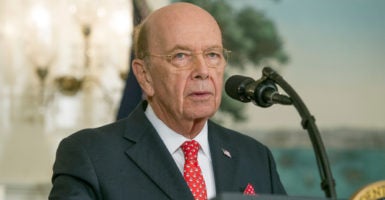 The United States will be turning the tide on economic freedom, said Commerce Secretary Wilbur Ross, referencing the United States being ranked 18th on The Heritage Foundation’s Index of Economic Freedom.

“It’s imperative that we acknowledge and address the reasons for which our country lags behind the 17 nations that are ranked above us,” Ross said Monday, speaking at The Heritage Foundation. “The good news is that thanks to President [President] Trump, we believe our downward slide in the index over the past decade not only has come to a halt, but should be reversing itself.”

Though free trade was among the factors determining which governments offered the most free economic environment, Ross gave a staunch defense of the Trump administration’s tariffs.

“We believe that trade should be fair, free, reciprocal, and free, free, free. But free trade is almost like the unicorn in the garden. People talk about it, but it’s very, very hard to find it now days,” Ross said. “Our tariffs are among the lowest of any major country in the world and we have the least in the way of nontariff trade barriers. Yet American exporters are plagued by every type of tariff and nontariff barrier thrown against them even by our most trusted allies.”

During the question and answer portion, Heritage Foundation President Kay Coles James asked if the United States is in a trade war with China.

“You’ve probably heard the president recently say, a trade war has been going on for the last 50 years,” Ross said. “The only difference is that now American troops are coming to the ramparts.”

In the Index of Economic Freedom, Hong Kong maintains the No. 1 spot for the fourth consecutive year. Five other countries ranked as free: Singapore, New Zealand, Switzerland, Australia, and Ireland. Rounding out the top 10 countries are Estonia, the United Kingdom, Canada, and the United Arab Emirates. The U.S. is ranked in the second tier category of “mostly free.”

For its part, amid fears of a trade war between the world’s two largest economies, China ranks 110th on the index.

“In Davos recently, I was on a panel with the director of the World Trade Organization,” Ross said, referring to the World Economic Forum in January. “To start things off, I asked him the question: If the United States is not the least protectionist big country, please tell me who is. He had no answer. So, we are using all of our available tools to ensure a level playing field.”

Coming in as least economically free in the index is North Korea at 180th. Neighboring South Korea ranks 27th.

Categories for ranking are “rule of law,” “government size,” “regulation efficiency,” and “open markets.” Each has three subcategories. High rankings in these categories correspond with individual prosperity, health, higher education levels, and have better environment, according to the index.

For thousands of years, people were denied economic freedom and lived dehumanizing lives of poverty and sickness, James said during her remarks.

“A few people controlled most of the power and most of the wealth and everyone else suffered for it,” James said. “Thankfully, those days are over for more people today than at any previous time in human history. But we still see instances, such as in North Korea, that serve as a stark reminder of where we’ve come from and where we could return if we don’t remain dedicated to building a better future.”

Rolling back regulations has been “one of the most positive achievements of the Trump administration,” said Terry Miller, the director for the Center for International Trade and Economics at The Heritage Foundation, who presented the report’s findings. But it hasn’t had time to factor into the ranking.

“It is in fact too early for us to be able to take account of those changes in this year’s edition of the index,” Miller said. “We will be picking that up strongly next year in the index as well as changes from the tax reform. So there is some hope that the U.S. score will improve. I would caveat that only with the issue of trade policy, which seems to be going in the opposite direction at this time. It would be very hard to predict what would happen to the U.S. score in the year ahead.”