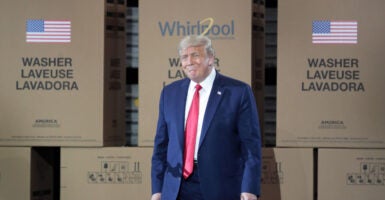 President Donald Trump on Thursday visited a Whirlpool factory in Clyde, Ohio, to tout the benefits of his trade agenda for American manufacturers.

Whirlpool claimed to have been injured by foreign competition in 2017 and got the administration to impose tariffs ranging from 20% to 50% on washing machines—and parts—imported by its competitors the following year.

Now, Whirlpool is claiming that the policy created 200 new jobs in its Ohio factory.

The story is an easy one to tell because new jobs for Americans is great news. What the news headlines aren’t telling you is that Whirlpool is the beneficiary of textbook cronyism, with the government putting its thumb on the scale to pick winners and losers.

What the mainstream media also won’t tell you is that American families have paid $200 million so far for those 200 jobs.

Whirlpool claimed in 2017 that “the domestic industry suffered significant market-share loss, deteriorating financial performance, low and declining capacity utilization, and suppressed investment and employment.” Yet, just two years earlier, “in 2015, Whirlpool attained its highest annual revenue since 2007,” and in 2016, the company sold 9.7 million washers, 18% more than in 2013.

Injury was largely proven by the loss of market share experienced by Whirlpool over the previous 10 years. It was estimated that the company’s market share decreased from 70% in 2006 to roughly 35% in 2017, but Whirlpool saw competition from Samsung and LG coming for years.

In fact, in 2006, Whirlpool faced government scrutiny pursuant to antitrust laws, but the company successfully assuaged those concerns by pointing to growing competition from Samsung and LG.

While Whirlpool was using crony tariffs to hurt its competition, Samsung and LG were actively building their first washing machine plants in the U.S. and creating hundreds of American jobs.

These new plants allow Samsung and LG to lower transportation costs, making their high-tech washers and dryers more affordable for American families. Both companies made plans for these factories as early as 2010 and have plans to further expand their U.S. operations.

The real victims of this cronyism were not Samsung and LG, though. As a result of the tariffs, coupled with higher tariffs on steel and aluminum in 2018, American families are facing higher prices for washers and dryers.

A recent study indicates that after roughly one year of higher tariffs, domestic washer prices increased by $86 per unit and dryers increased by $92 per unit. Furthermore, Americans have paid more than $200 million in tariffs to import washers and washer parts since 2018.

Crony washer tariffs were OK by Whirlpool, but crony steel and aluminum tariffs hit the company hard. Marc Bitzer, Whirlpool CEO, told The Wall Street Journal in 2019, “Over the last two years, we had more than $600 million in material-cost inflation. There is just not enough margin in our business to just absorb it. So, we had to pass on that cost.”

Just like Whirlpool, Samsung and LG are hurt by tariffs on imported steel and aluminum, the cost of which makes their plans for future investment in the U.S. more difficult.

That’s the problem with cronyism. When the government imposes regulations, taxes, or tariffs to aid one industry or company, others pay the price.

Beneficiaries of these policies say the government is “leveling the playing field,” but the truth is that unfairness in the market just shifts to someone else.

The cost of the tariffs to consumers originally cited has been corrected.