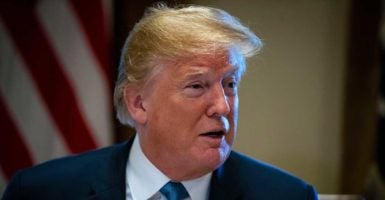 The Trump administration has threatened to implement tariffs on countries, like China. (Photo: Al Drago/CNP/AdMedia/Newscom)

Last week, the White House announced that instead of implementing unilateral restrictions on Chinese investment it would defer to Congress and its efforts to reform the Committee on Foreign Investment in the U.S. (CFIUS).

This is a good sign that the White House is planning to work with Congress to implement long-term solutions to credible national security threats.

Since the White House announced its intent to place restrictions on Chinese investment there’s been a good amount of speculation about what that would look like. One thought was that President Donald Trump would use his authority from the International Emergency Economic Powers Act (IEEPA) to declare a national emergency and block certain foreign investments.

Figuring out which investments to block under IEEPA, and how this would be carried out, would be a bureaucratic nightmare that would surely undermine foreign investors’ confidence in the U.S.

Unduly blocking foreign investment under the guise of national security would surely lead other countries like China to reciprocate against U.S. investors.

Since 1975, CFIUS has been an inter-agency effort led by the Department of the Treasury that looks at foreign investments in the U.S. that have the potential to put national security at risk.

For example, CFIUS will look at foreign investments in technologies, manufacturing, and utilities. Policymakers are concerned over the growing number of investments from China.

Currently, Congress is looking at how to reform CFIUS by expanding the types of investments it can review.

It’s questionable whether CFIUS needs a significant reform and not just moderate support from Congress.

While the debate to reform CFIUS is still ongoing, and it’s good to see the White House taking a conservative approach with CFIUS reform instead of unilaterally restricting Chinese investment, the same can’t be said for a unilateral approach towards trade.

There is still the looming threat of tariffs from the White House.

On Friday, the Customs and Border Protection will begin collecting an additional 25 percent tax of $34 billion worth on certain imports from China.

The reason why Americans will have to spend an additional 25 percent for certain items is still questionable–whether it’s about convincing China to give up its industrial policy, attempting to change the bilateral trade balance, or simply to punish China for various intellectual property theft.

What’s for sure is that prices in both countries will be increasing in the short term. For some U.S. manufacturers it could mean a loss of jobs. For U.S. farmers it means a loss of profit and market share as China retaliates with its own tariffs on U.S. exports.

Even if Washington and Beijing can come to an agreement sometime soon, these efforts may be too little, too late for those who’ve been moved out of their market due to higher costs.