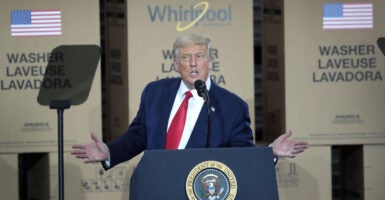 Americans have paid taxes of up to 50% on washing machines and their inputs since washer tariffs were first put in place by the Trump administration in January 2018. Pictured: Then-President Donald Trump arrives to deliver a speech to workers at a Whirlpool manufacturing facility on Aug. 6, 2020, in Clyde, Ohio. (Photo: Scott Olson/Getty Images)

Sunday was supposed to mark the end of a three-year rinse cycle for Americans, at least when it comes to higher prices for washing machines. But before leaving office, former President Donald Trump put washer tariffs on repeat for another two years.

Americans have paid taxes of up to 50% on washers and their inputs since the tariffs were first put in place in Jan. 2018.

Whirlpool, the primary beneficiary of these tariffs, argued then that foreign competition from companies like Samsung and LG was causing injury to the domestic industry, and that import tariffs were necessary to “safeguard” American manufactures.

Since 2018, prices on washing machines have increased by 12%, or almost $100 per unit, as a direct result of these tariffs. In total, consumers have paid an additional $1.5 billion annually in higher prices, which far surpasses the $82 million made in tariff revenue.

A representative from LG warned against the move, stating back in 2018: “This is a tax on every consumer who wants to buy a washing machine. Everyone will pay more, with fewer choices.”

But rather than appeal to American families, Whirlpool instead pushed for another three years of protections.

In 2020, Whirlpool filed for an extension of tariffs under Section 201 of the Trade Act of 1974. Sen. Sherrod Brown, D-Ohio, testified in front of the International Trade Commission on the company’s behalf, arguing:

Samsung and LG have gone to great lengths to put American producers out of business and dominate the U.S. washer market… An extension of the safeguard is necessary to ensure American companies like Whirlpool are able to compete on a level playing field.

In November 2020, the International Trade Commission agreed with Brown and Whirlpool, recommending an extension of the tariffs for an additional two years.

In the official report, the commission pointed to COVID-19 as a major reason for postponing their expiration, claiming that the pandemic prevented domestic manufacturers from realizing the full tariff benefit, which affected their ability to appropriately adjust to competition.

But Whirlpool had already been struggling pre-pandemic. Even with two years of tariffs on its competition under its belt, Whirlpool’s 2019 net sales still tanked by more than 5% compared to the previous year. And like its competitors, Whirlpool ultimately raised its prices to make up for lost revenue.

While it’s true that Whirlpool has been able to add 200 new jobs since the measures were first implemented, its foreign competitors have also made contributions to the U.S. labor force.

Samsung and LG were both in the process of opening manufacturing plants at the time the tariffs were first introduced, and although it came as a major blow to their operations, these facilities created more than 1,500 new jobs for Americans.

Although Whirlpool, LG, and Samsung created over 1,700 new jobs for Americans, which is welcome news, comparing those numbers against consumer costs paints a different picture. Because families ultimately bear the tariff burden downstream in the form of higher prices, import taxes on washing machines have cost Americans over $800,000 per job created.

It certainly comes as no surprise that Whirlpool commended the Trump administration’s extension, proclaiming, “[This] culminates a nearly decade-long effort by Whirlpool Corporation to help ensure free and fair trade policies that benefit both our consumers and our 15,000 U.S. employees.”

But a policy that costs Americans over $236 million in unnecessary taxes on washer imports and panders to special interests is not “free” nor “fair.”

The Biden administration should immediately press “cancel” on this cycle and reverse these costly tariffs.