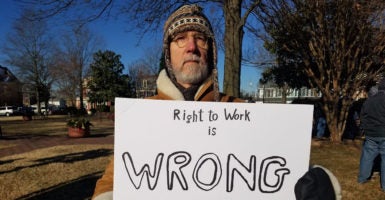 GEORGETOWN, Delaware—Despite one county’s decision to reject a right-to-work law, Delaware will remain the only state in the Northeast and Mid-Atlantic with a local statute prohibiting imposition of union mandates on private sector employees.

The town of Seaford intends to move ahead with its right-to-work law even though surrounding Sussex County backed down in the face of pressure from labor unions whose leaders argued that the change would drive down wages.

“Right to work is one tool that will help to improve our competitive posture so we can lure in new businesses,” Seaford Mayor David Genshaw told The Daily Signal in an interview.

And in Kentucky, where local action to pass right-to-work laws has galvanized the movement, one county official says Seaford did the right thing for its residents last month even as Sussex County backed down this week.

“People are noticing that Warren County, Kentucky, is a great business-friendly place to live, to work, or to start a business,” Mike Buchanon, the county’s judge-executive, told The Daily Signal.

Commercial and residential development is booming, he said, as is the hotel business.

The Sussex County Council rejected its own right-to-work ordinance in a 4-1 vote Tuesday after County Attorney J. Everett Moore told members that the law would not prevail against inevitable legal challenges from unions.

Councilman Rob Arlett, an early proponent, was the only member of the all-Republican council to vote for the measure one week after union members packed the council chambers during a public hearing.

Elected officials in Seaford, however, took the unexpected step of passing their own ordinance Dec. 12 in a unanimous vote. The city of about 7,000 in southwestern Sussex County was once home to a 35-acre DuPont plant that created thousands of local jobs by producing nylon used in military parachutes.

Sussex is one of three counties in Delaware.

As mayor of Seaford, Genshaw said he wasn’t content to wait for the county to act and anticipated that the city’s own right-to-work law could attract businesses and opportunities to the site of the former DuPont factory as well as other parts of Seaford.

“When you compare right-to-work states with non-right-to-work states, it’s clear to me that this could mean big gains for Delaware,” Genshaw said in an October interview. “I talk to a lot of families who want their kids to stay in the area, but we need to create opportunities that have gone missing in recent years.”

Signs of Boom in Kentucky County

As judge-executive, Buchanon, a Republican, is Warren County’s elected chief administrator, similar to a mayor. In previous interviews with The Daily Signal, he described how a broad cross-section of Kentucky residents came together to support right-to-work legislation in Warren County that passed in 2014.

For years, Warren County had been losing out to neighboring parts of Tennessee, Buchanon explained, because experts recruited by companies and other employers to identify potential work sites viewed right-to-work status as a critical factor in making a final determination.

At the time, Tennessee was a right-to-work state and Kentucky was not. Times have changed.

Since passage of the ordinance in December 2014, Warren County has attracted 174 prospective new businesses, representing about $2.5 billion in potential investment, and 16,618 jobs have materialized, according to the Bowling Green Area Chamber of Commerce.

Buchanon estimates that Warren County now has more than 6,000 openings for blue-collar and white-collar jobs in a wide range of fields that include manufacturing, education, health care, retail, hospitality, construction, and engineering positions.

“We are growing our workforce as well, with inward migration, attracting workers from across the nation and from around the globe,” Buchanon told The Daily Signal in an email Tuesday.

A new University of Kentucky Medical School is under construction on the Bowling Green campus, and multi-unit residential apartments and townhouses are being built throughout downtown Bowling Green and on campus.

“The economy is growing to an historic level, and new people are moving into Bowling Green in Warren County every single day,” Buchanon said. In response to the action in Warren County, 11 other Kentucky counties quickly followed suit with their own ordinances, and the whole state went right to work in January 2017.

A total of 28 states and the territory of Guam now have right-to-work laws. In addition to Kentucky, since 2012, Indiana, Michigan, Wisconsin, and West Virginia have become right-to-work states.

Despite the transformative influence of right to work in Kentucky, union leaders and activists who gathered to protest the proposed Sussex County ordinance in Delaware insisted that it would harm average workers.

That’s what James Maravelias, president of the AFL-CIO in Delaware, said in a Jan. 2 interview with The Daily Signal during a protest by labor unions at the Georgetown Circle outside the Sussex County administration building.

If passed, a countywide right-to-work law would lower wages for workers, Maravelias said.

Standing next to him, Michael Begatto, executive director of AFSCME Council 81, echoed that argument.

The state AFL-CIO president was joined by dozens of union members from the American Federation of State, County and Municipal Employees, the United Food and Commercial Workers, the Communications Workers of America, the International Brotherhood of Electrical Workers, and the Delaware State Education Association, among others.

During the Jan. 2 hearing, Sussex County Council members heard from county residents on both sides of the debate.

To Jermaine Johnson, a member of United Brotherhood of Carpenters Local 173 who said he also is a pastor with Prophetic Kingdom Ministries, right to work is “about defunding and dividing the ability of unions to negotiate on behalf of the worker.”

‘There Is No Pie’

But other residents spoke out ardently in favor of the bill.

Lyle Humpton, of Bridgeville, represented Master Interiors, a Delaware-based acoustical contractor that he described as an “open shop company” with 43 employees.

“There is a bigger issue here than just union versus nonunion,” Humpton told council members. “This is about freedom and liberty versus government intrusion.”

Kevin Burdette, a Milton resident who heads the KNB Associates business consulting company, told council members that a right-to-work law would create a “bigger pie for everyone,” including union and nonunion companies.

Burdette added: “Unless we get other jobs coming to Sussex County, there is no pie. Economic growth has occurred at higher rates in right-to-work states.”

David Stevenson, an economist with the Caesar Rodney Institute, a Wilmington-based free-market think tank, picked up on this point during his testimony.

Over the past decade, Delaware’s economy has grown by 0.4 percent a year, he said, and in 2017, the state was one of only four that logged a rise in unemployment.

Contrary to what union leaders and members said in public statements, incomes rise just as fast in right-to-work states as in other states when the cost of living is properly considered, Stevenson argued:

Stevenson cited a 2015 report from The Heritage Foundation that shows right-to-work laws do not lower pay in the private sector.

In summary, worker pay, benefits, and safety are the same with or without right-to-work [laws]. However, faster economic growth will raise incomes through higher-paying occupations and a tighter labor force, putting upward pressure on wages.

It is certainly true that unions likely would challenge a right-to-work law in court, Buchanon told The Daily Signal, but the Kentuckian said that Sussex County officials, in his opinion, should have pressed ahead.

“Although I am not familiar with Delaware’s constitution or their laws, the federal courts were clear in their decision about the legal rights of counties as political subdivisions of the state,” the Warren County official said.

“The courts recognized counties’ rights and responsibilities to govern and make laws in the interest of protecting individual workers’ rights and freedoms, and for economic development and commerce,” Buchanon said, adding:

I believe that the unanimous decision of the federal appeals court in the Hardin County, Kentucky, decision established a clear legal path forward for counties in most every U.S. state.

This doesn’t mean that a union can’t file a suit. Certainly they have the right to file legal action, as everyone does. However, that doesn’t mean they can win, and in light of the federal appeals court’s decision, their suit would appear to me to be a waste of their time and of their members’ money.