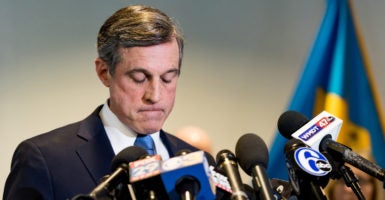 Gov. John Carney, pictured in 2017, supports Delaware's participation in a climate change agreement with eight other states. Three residents are fighting for the standing to oppose the costs of the initiative in court. (Photo: Doug Curran/Reuters/Newscom)

Delaware regulators have imposed costly and unlawful climate change regulations on industry in violation of legislative directives, according to three citizen activists who took their case to the state’s highest court.

But before the Delaware Supreme Court can address the substantive questions raised in the residents’ lawsuit, it first must resolve a lower court ruling that “failed to apply the correct legal test for standing,” Richard Abbott, their lawyer, said in an interview with The Daily Signal.

The Superior Court of Delaware ruled in June that residents David T. Stevenson, R. Christian Hudson, and John A. Moore did not have legal standing to challenge the state’s participation in a regional climate change agreement.

The three men had argued that the agreement’s regulatory restrictions on greenhouse gas emissions would raise their electricity bills. But Judge Richard Stokes decided that they failed to demonstrate this would be the case, and therefore did not have standing.

State government officials who have joined the initiative argue that greenhouse gases such as carbon dioxide are responsible for dangerous levels of climate change, also known as global warming.

The gases enter the atmosphere during the industrial burning of fossil fuels such as coal, natural gas, and oil. However, a growing number of scientists question theories that link human activity to significant climate change, and instead point to natural forces.

States that are parties to the agreement must impose a “cap and trade” arrangement in which government officials set an upper limit on carbon dioxide emissions from fossil fuel plants. Companies subject to the caps may trade “allowances,” however.

Since there will be fewer carbon dioxide permits available for electricity generators to purchase under the regulations, the three plaintiffs argue, the price of the permits will rise in response to the realities of supply and demand, and that these higher costs will be passed along to consumers.

At the heart of the case is the authority of Delaware’s Department of Natural Resources and Environmental Control. Gov. John Carney, a Democrat who took office in 2017, supports the initiative.

When the lawsuit initially was filed in December 2013, the agency’s regulations had not gone into effect. For Delaware residents to have standing to sue, they needed to show there was a “probable injury” and not an “actual injury,” Abbott, the plaintiffs’ attorney, said in the phone interview.

Abbott argued that the trial court judge, Stokes, should have considered only facts that were relevant when the suit was filed, instead of relying on “postfiling facts.”

The precedent in Delaware, and in other states with cases involving energy consumers who dispute government policies, says that standing must be “broadly and liberally applied,” he told The Daily Signal.

“When making this determination about standing, it’s not supposed to be a stringent straitjacket like this judge wants to make it out to be,” Abbott said, adding:

One reason for the confusion, I think, is that it took more than four years for the court to dispose of the case, and these cases are typically done in a 12- to 18-month time period.

But it’s difficult because DNREC [Department of Natural Resources and Environmental Control] filed all kind of frivolous motions at the beginning of the case, which they always do because the government gets away with filing frivolous motions without being held accountable.

“You can’t show your electricity bills went up at the beginning of a case before the regulations even took effect, and the electricity providers can’t apply for a rate increase before they’ve had an increase in costs,” Abbott said. “This is impossible. Once again, the correct test for standing is what’s happening at the time of filing.”

Challenging Changes to the Cap

In November 2013, the Department of Natural Resources and Environmental Control altered the “size and structure” of the cap on carbon dioxide emissions. The cap became substantially lower and more restrictive than what the Delaware General Assembly approved through the memorandum of understanding with other states, the three plaintiffs say in their brief to the Delaware Supreme Court.

The three residents’ brief says the memo of understanding doesn’t permit “any changes” related to caps on carbon dioxide, requiring the agreement to be “formally amended by all signatory states” before adoption of any regulations reducing the caps from 2014 through 2018.

The caps on CO2 established in the agreement “are mandatory, static, and not expressly permitted to be changed by DNREC’s unilateral regulatory action,” their brief argues.

Delaware regulators routinely file “frivolous motions” and “play the game about standing,” Abbott said, because they want to avoid answering substantive questions about their modifications to the caps on carbon emissions without the approval of elected officials.

Officials at the Department of Natural Resources and Environmental Control “know that if the case ever gets to the merits, they are dead,” Abbott said, adding:

The state legislature said you can adopt regulations that are consistent with the MOU [memorandum of understanding], but they essentially cut the cap in half. There is no question that the regulations are illegal and inconsistent with what was authorized by statute.

I’ve litigated many cases against DNREC and have won every single case because they just ignore the law. This has gone on for decades. There is an institutional problem with this agency, where they have just gotten into the habit of doing whatever they feel like.

The Daily Signal sought comment from the agency’s public affairs department, but officials had not responded by publication time.

As The Daily Signal previously reported, Virginia Gov. Ralph Northam, a Democrat, has advanced his own regulatory proposal to make his state part of the Regional Greenhouse Gas Initiative.

The Virginia proposal, which could go into effect in December, has attracted criticism from lawmakers, policy analysts, and citizen activists who say the state should not enter the climate pact without the approval of the Virginia General Assembly.

“Gov. Northam is sadly encumbering the state of Virginia with a regulatory monster that will have no impact on the climate even if you believed every claim made by Al Gore or the United Nations,” Marc Morano, a prominent climate change skeptic, told The Daily Signal in an email. “RGGI will do nothing but saddle Virginia with meaningless climate change inspired regulations on Virginia industry.”

Morano, executive editor and chief correspondent of the Climate Depot website and author of the bestseller “The Politically Incorrect Guide to Climate Change,” has been critical of state policymakers who implement climate change regulations without popular support.

“RGGI will make states like Delaware and Virginia less competitive with other states wise enough to avoid this virtue-signaling nonsense,” Morano said. “If Gov. Northam bypasses the legislature to impose these economically strangling regulations, it will prove once again that the governor lacks the support of the people and the legislature to impose this monstrosity on the state of Virginia.”

“The same is true in Delaware, where stringent regulations are imposed without legislative approval,” he said.

New Jersey also is set to join the climate pact. Gov. Philip Murphy, a Democrat, issued an executive order in January reversing a decision by his Republican predecessor, Chris Christie, to keep New Jersey out of RGGI.

California has its own cap-and-trade program covering power plants, factories, and oil refineries.

In Washington state, voters were set to vote Tuesday on a ballot question, Initiative 1631, which would impose the nation’s first tax on carbon dioxide emissions. Gov. Jay Inslee, a Democrat, long has been a proponent of the carbon tax and cap-and-trade proposals.