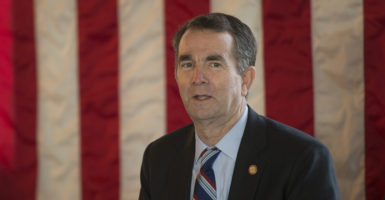 Virginia Gov. Ralph Northam is poised to implement a new regulation without legislative approval to join 10 other states in a climate change agreement based on restricting carbon dioxide emissions from coal-fired power plants.

But lawmakers, policy analysts, and tea party activists in Virginia who oppose what they consider costly regulations of industry are raising questions about the economic and scientific arguments underpinning the proposed rule.

They say the Virginia General Assembly should have a straight up-or-down vote on Northam’s plan, in part to ensure that any revenue the Democratic governor raises from “carbon trading” is collected and dispersed in a manner consistent with the state Constitution.

The public comment period for a draft version of Northam’s proposed regulation ended in April. The Virginia Department of Environmental Quality is expected to introduce a final version in November.

The seven-member Air Pollution Control Board then will be responsible for making a decision. Board members, appointed by the governor, operate independently from the Department of Environmental Quality.

Northam, a physician from the state’s Eastern Shore who previously was a state senator and lieutenant governor, took office in January after being elected governor last November.

Michael Dowd, director of the environmental agency’s Air and Renewable Energy Division, told The Daily Signal in a phone interview that the Air Pollution Control Board “has a lot of authority with respect to promulgating regulations.”

A board majority may “reject, accept, or modify” the proposed rule as it sees fit, Dowd said.

If the board decides in favor of the regulation, he said, it could go into effect by December.

The Virginia General Assembly does not go back into session until January, however. With Democrat gains in the state’s November 2017 elections,  Republicans have a 51-49 edge in the House of Delegates and a 21-19 margin in the state Senate.

Officials of states that entered the Regional Greenhouse Gas Initiative argue that greenhouse gases such as carbon dioxide are responsible for dangerous levels of climate change, also known as global warming. These gases enter the atmosphere during the industrial burning of fossil fuels such as coal, natural gas, and oil.

However, a growing number of scientists question theories that link human activity to significant climate change, and instead point to natural forces.

Participating states are required to impose a “cap and trade” arrangement. Government officials set an upper limit on carbon dioxide emissions from fossil fuel plants. But “allowances” may be traded back and forth among the companies subjected to the caps.

“Joining RGGI now is like joining a football team that’s trailing 40-3 in the 4th quarter,” Nick Loris, an energy policy analyst with The Heritage Foundation, said in an email to The Daily Signal. ‘There’s no real upside. No impact on climate. Higher electricity bills for families. Lost business opportunities.”

The problem with the development in Virginia is that “unelected regulators” have been granted too much authority over major policy decisions that will have significant statewide impact, Craig Rucker, executive director and co-founder of the Committee for a Constructive Tomorrow, told The Daily Signal.

“The RGGI system has been very damaging to those states that are participating,” Rucker said in a phone interview. “You see much higher electricity rates on average in those areas where RGGI is in effect, and you also see those states losing ground economically in comparison to other states that are not part of this agreement. And it should be noted that the RGGI states are not achieving anything in terms of lower global temperatures.”

The Committee for a Constructive Tomorrow, known as CFACT, is a Washington-based group that supports free market solutions in energy policy.

Virginia lawmakers should have the opportunity to weigh in on a regulatory change that could have “long-term ramifications,” Rucker said, adding:

Because the effects of these regulations are not always immediately evident and often materialize over time, I don’t think it’s healthy for our democracy to have this change implemented administratively by individuals who do not have to stand before the voters. We are talking about rising energy costs that will impact future generations and impact Virginia’s ability to compete economically with other states.

But Dowd, the state Department of Environmental Quality official, said the Northam administration disagrees with critics who say the governor is making an end-run around the General Assembly to join the multistate climate change pact.

“We’ve heard that argument and we disagree with it,” Dowd said in the interview with The Daily Signal. “Our position is, and it always has been, that the state air pollution law vests the state air board with broad authority to control air pollution, and that linking to RGGI in a carbon trade or carbon cap-and-trade program is well within the statutory, regulatory authority of the air board.”

While there will be “some expense” to energy consumers, the proposal has been carefully crafted to limit the impact, Dowd told The Daily Signal:

We have heard the concerns about [rising energy] costs and our response is that we have taken this into consideration in the economic modeling we have done, and the modeling indicates that the impact to ratepayers is relatively minimal. In fact, the impact to ratepayers should be a little over 1 percent between now and 2030. We think we have constructed a rule with the right approach and that this is the most cost-effective way to control carbon in Virginia.

In April, Northam vetoed a bill from Delegate Charles Poindexter, a Republican, that would have prohibited the governor or any state agency, including the Air Pollution Control Board, from entering into RGGI or creating any other cap-and-trade program without legislative approval.

In a press statement, Northam explained why he vetoed Poindexter’s bill.

“Climate change affects all citizens and business entities in the Commonwealth, especially those located in coastal regions,” the governor said, adding:

Virginia residents who oppose Northam’s plan to enter the Regional Greenhouse Gas Initiative were expected to show up in force Saturday for the Virginia Tea Party’s Fall Summit Meeting in Richmond.

Randy Randol, who analyzes energy and environmental issues for  the Virginia Tea Party, said in a phone interview that the governor already has tacitly acknowledged limits to his authority over finances, and that these limits could affect implementation of RGGI.

“As predicted, Northam has requested that he be allowed to spend permit fee collections, confirming that he lacks authority to fully implement the program,” Randol said.

Virginia Natural Resources Secretary Matthew Strickler informed a legislative commission earlier this month that Northam would ask the General Assembly “to keep and spend the proceeds of a new electricity carbon tax, rather than find a way to return it to ratepayers,” according to news reports.

Strickler estimates that under the Regional Greenhouse Gas Initiative, Virginia utilities would have to purchase carbon credits that would generate $200 million in revenue.

How this money is collected, distributed, and appropriated remains an open question and a major sticking point.

The carbon credits that energy companies would be required to purchase under such a plan would generate between $175 million and $208 million for Virginia government, according to a fiscal note attached to legislation from Democratic lawmakers to authorize a cap-and-trade plan. Lawmakers defeated that plan in a party-line vote.

“The Department of Environmental Quality originally sold RGGI as a recycling program to get the money back to the consumer,” Randol said. “The RGGI fee will be a direct pass-through to every class of electricity consumer—residential, business, and industry.”

Utilities are immune because they will pass the tax along to the consumers. What the governor is calling a fee is really tax, and there are reasons why he doesn’t want to call it tax.

The Virginia Tea Party has opposed every ration and tax and cap-and-tax scheme that has been proposed. There was, for example, a proposal to tax power plant emissions to fund flood mitigation that we strongly opposed.

This proposal to move us into RGGI would impact the poorest residents of Virginia the most.

‘Where the Money Goes’

Poindexter, the state delegate who pushed the bill requiring the General Assembly to approve any move into RGGI, told The Daily Signal in a phone interview that he opposes the governor’s plan both legally and substantively.

Although the Virginia Constitution may give the governor latitude to join RGGI, it doesn’t provide him with the authority to control the appropriation and spending of funds derived from the multistate agreement, Poindexter said.

“Where the money goes and who controls how it’s spent is still up in the air, and therein lies the problem with the governor doing this on his own,” Poindexter said. “Under the Virginia Constitution and state law, money cannot be spent without appropriation from the General Assembly. What’s happening now is an attempt to work around constitutional requirements and the requirements of state law, to allow the governor to have control of the estimated $200 million in revenue from the sale of these carbon credits.”

Poindexter, who represents Patrick County and parts of Franklin and Henry counties, also is a member of the state Commission on Energy and Environment.

As a matter of policy, Poindexter said, he views the Regional Greenhouse Gas Initiative as detrimental to Virginia’s best interests. He anticipates that it will discourage energy production from inside the state and undermine future job opportunities.

“Virginia would not be putting itself in good company by joining RGGI,” the lawmaker said. “When you look at where the electricity rates are in those states that are now in RGGI versus what we have now in Virginia, my concern is that entering into this agreement would lead to electricity rates rising to some level that is equivalent or even higher than they are in those other RGGI states.”

“Also,” Poindexter said, “my understanding is that in RGGI states, electricity generation typically moves out of those states and the power is then imported. That would not be a healthy development for our state, should we start to lose those jobs related to energy generation.”

Rucker and others at the Committee for a Constructive Tomorrow also challenged the scientific premise underpinning RGGI and similar state-level agreements. They point to updated research that shows natural forces, as opposed to human activity, are primarily responsible for climate change.

In the run-up to Saturday’s Virginia Tea Party Summit, another question was on the mind of participants.

“Our concern with what the EPA has proposed is that it is not very stringent and that it’s really not going to move the ball forward in terms of regulating carbon emissions,” Dowd of the state Department of Environmental Quality said. “RGGI represents a far more stringent and more realistic approach, and I don’t think the ACE rule as proposed is strong enough to control carbon.”

But Heritage’s Loris said he views the Regional Greenhouse Gas Initiative as a losing proposition for Virginia.

“Interestingly, the United States isn’t leading the developed world in greenhouse gas reduction because of a regional cap-and-trade program,” Loris said. “The private sector’s investment in cheap, abundant, and affordable natural gas is the reason.”