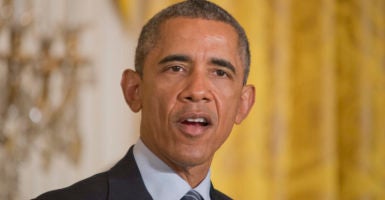 The Environmental Protection Agency accelerated the Trump administration’s deregulatory agenda Tuesday by announcing a proposed rule to replace the Obama administration’s “Clean Power Plan” with guidelines that give states more flexibility to determine how to reduce greenhouse gas emissions from coal-fired power plants.

“The era of top-down, one-size-fits-all federal mandates is over,” Wheeler said.

However, the Trump administration views the Obama administration plan as an overreach of the EPA’s authority under the Clean Air Act of 1970, which requires the agency to set “national ambient air quality standards for certain common and widespread pollutants based on the latest science.”

“Replacing this disastrous plan with a more rational standard and empowering states in this effort is a welcome shift away from the Obama-era standards that would have fundamentally dictated what energy sources Americans could use,” Heritage Foundation economist Nick Loris said in a formal statement.

In February 2016, the Supreme Court ordered a halt in enforcement of the Clean Power Plan until a lower federal court ruled on its legality. That order—which came in response to legal challenges from 27 states, 24 trade associations, 37 rural electric co-ops, and three labor unions—marked the first time the high court had stopped a regulation before a lower appeals court issued a final judgment.

If the Obama plan had been implemented, it would have “driven up energy prices for consumers and businesses by double-digit electricity price increases in 40 states,” according to one analysis cited by Wheeler.

The era of top-down, one-size-fits-all federal mandates is over. By acting within the law and rebalancing federal and state roles, we will give states and the private sector the regulatory certainty they need to invest in new technologies and provide clean, affordable energy for all Americans.

During the call, Wheeler also discussed “one of the great and seldom-told American success stories,” which he said demonstrates how the nation is achieving energy independence while reducing carbon dioxide emissions and boosting air quality.

From 2005 to 2017, total U.S. energy-related CO2 emissions fell by 14 percent, he said, in contrast to global energy-related emissions, which increased by more than 20 percent.

Ken Kimmell, president of the Union of Concerned Scientists, a nonprofit based in Cambridge, Massachusetts, released a statement saying:

The proposal fails to meet EPA’s mandatory duty to curb global warming emissions from major sources such as power plants, which account for about 28 percent of US greenhouse gas emissions. The plan calls for only modest efficiency improvements at individual power plants, which will barely make a dent in cutting heat-trapping emissions from the electricity sector, and could even, under some circumstances, lead to increased emissions depending on how much the plants are run.

Bill Wehrum, assistant administrator for the EPA’s Office of Air and Radiation, said during the conference call that the proposed rule includes three main components.

For starters, it redefines the relationship between the federal government and the states within the context of the Clean Air Act, so that states have the primary authority for determining what emission controls are needed on power plants within their jurisdictions, Wehrum said.

“The Clean Power Plan was federal heavy,” Wehrum said of the Obama administration initiative. “It was essentially a federal mandate that left the states very little latitude as to what they would do under the program and how they would do it. We believe that’s not the correct way to implement this part of the [Clean Air Act], and that’s not what Congress intended.”

The rule also gives the federal government the ability to “create a framework of regulation” applicable to the states and “to make recommendations” with an eye toward improving the efficiency of certain power plants and to “identify a list of candidate technologies” that can lead to lower emissions, he said.

The third component involves revisions to a program called New Source Review so that this part of the Clean Air Act can operate “in concert rather than in conflict” with the new rule, Wehrum said.

Bonner Cohen, a senior fellow with the National Center for Public Policy Research, told The Daily Signal in an email that the proposed rule fulfills a key promise Trump made to supporters:

President Trump’s EPA has scuttled the Obama Clean Power Plan and put in its place an initiative that will provide Americans with affordable and reliable energy.  And he has kept his promise to end the Obama war on coal. Unable to get Congress to enact cap-and-trade legislation, Obama said there was another way to ‘skin the cat,’ and he instructed his political appointees at EPA to concoct a top-down, one-size-fits-all scheme to raise electricity prices for all Americans. Now Trump is skinning Obama’s cat.

“Economically and environmentally, the Trump administration is completely justified to undo President Obama’s climate legacy that grossly exceeded the statutory authority of the Environmental Protection Agency,” Loris, an energy and environmental policy analyst with The Heritage Foundation, said in a prepared statement.

The so-called Clean Power Plan would have spelled higher energy bills for families, individuals, and businesses. Moreover, it would have destroyed jobs and strained economic growth—for no meaningful impact on global temperatures. Replacing this disastrous plan with a more rational standard and empowering states in this effort is a welcome shift away from the Obama-era standards that would have fundamentally dictated what energy sources Americans could use.

Ultimately, Congress needs to recognize that these overbearing climate regulations are not only costly but also completely ineffective in achieving their supposed goals, and should act to prohibit the EPA and all other federal agencies from instituting similarly misguided regulations on emissions.

The EPA will receive comments on the proposal for 60 days after it is published in the Federal Register; the agency also will hold a public hearing.

More information about the proposed rule, including a prepublication version of the Federal Register notice and a fact sheet, is available here.