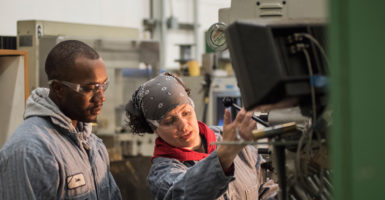 "Right to work is a tool we need to compete for jobs," says a Delaware mayor. (Photo: Jetta Productions Blend Images /Newscom)

SEAFORD, Delaware—One Delaware county is poised to change its economic climate, with a council member prepared to fight for a right-to-work ordinance introduced Tuesday.

“This is not about ruffling political feathers, but is about the status quo no longer being tolerable for Sussex County and … the need for private sector jobs,” said Councilman Rob Arlett in an interview with The Daily Signal.

“Actual real wages have decreased in Delaware,” added Arlett. “Why should that be OK?”

If Sussex County passes a right-to-work ordinance, it could signal change for the northeast region of the country, where no states are currently right to work, according to the National Right to Work Committee.

The all-Republican Sussex County Council needs at least three votes out of five for the ordinance to become law. The introduction of ordinance Tuesday begins the legal process that will allow for public discussion and debate of the proposal at a future date.

Arlett gave a presentation Tuesday based on a discussion he had with a private sector employer. That employer decided he could not expand his business in Sussex County, and instead decided to construct new facilities in North Carolina and Virginia, two right-to-work states.

“This is all about options and choices,” Arlett said while addressing the council and member of the public in attendance. “It is a tool in a toolbox. Companies have looked here, but once they realized we are not right to work they have gone elsewhere.”

Arlett expressed confidence in the prospects for his proposed ordinance in a phone interview after the meeting “I’m more optimistic now… based on the conversations I had with my fellow council members on right to work,” he said.

The proposed right to work ordinance is tentatively scheduled for public discussion when the council meets again in two weeks on Oct. 24

Seaford Mayor David Genshaw is keen on the idea of Delaware becoming the first state in the region to adopt a local ordinance that gives workers and their employers more choice. He anticipates that right to work could reverse the fortunes of his city, once home to the 35-acre DuPont nylon plant. The facility, which created thousands of local jobs, produced nylon used in military parachutes.

The Daily Signal visited with Genshaw in Seaford on Sept. 28. The city has around 7,000 residents, according to the latest Census data. Although the city is modest in size, Genshaw sees unexploited potential at the factory site DuPont previously occupied and in other parts of the city.

“I know a lot of families who want their kids to stay in the area,” Genshaw said. “But we have to create opportunities. Right to work is a tool we need to compete for jobs. If you compare right-to-work states with non-right-to-work states, you can see where this could mean big gains for Delaware.”

Warren County, Kentucky, began the trend toward local right to work when it passed an ordinance in the fall of 2014. Other Kentucky counties quickly followed suit.

Any legal challenges directed against the proposed right-to-work ordinance in Sussex County could face a steep uphill climb.

That’s because on Oct. 2 the Supreme Court declined to hear a petition that sought to overturn a ruling from the 6th U.S. Circuit Court of Appeals that upheld a local right-to-work law in Hardin County, Kentucky, that has inspired similar measures in other parts of the country.

“By declining to retry the Kentucky case, the Supreme Court has clearly signaled to lower courts that the 6th Circuit’s reading on the matter was sound,” Matt Patterson, executive director of the Washington-based Center for Worker Freedom, told The Daily Signal in an email.  “Communities across the country considering local right to work should be heartened by this development and proceed accordingly.”

While Delaware is taking the first incremental steps toward right to work in a part of the country where it has never taken root, New Mexico has already held the first of two public hearings on its own proposed ordinance, which supporters say is needed to help the state become more competitive with its right-to-work neighbors.

Patterson was in attendance for the first of those hearings last Thursday before the Sandoval County Commission. The next meeting is scheduled for Oct. 19.

Unlike Delaware, New Mexico is surrounded by right-to-work states.

“The officials in Sandoval County are determined to do everything they can to make their community economically competitive, including right to work,” Patterson said.

“Unions and their supporters of course turned out and made a lot of noise at the public hearing, but I don’t think those commissioners are going to be intimidated, especially in light of the Supreme Court’s decision to uphold the 6th Circuit’s reading of local [right-to-work] ordinances.”

The proposed ordinances in Delaware and New Mexico would only apply to the private sector. The Supreme Court recently agreed to take up Janus v. AFSCME, a case out of Illinois involving union mandates for government workers.