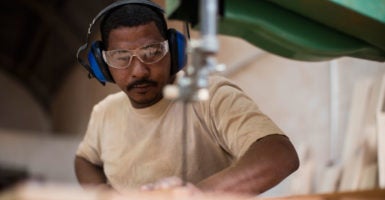 A small city in Delaware quietly has taken the unexpected step of passing its own right-to-work ordinance several weeks before officials in the surrounding county air a similar proposal.

The Seaford City Council voted unanimously for the right-to-work measure at its Dec. 12 meeting.

“We are superexcited about how the vote went,” Seaford Mayor David Genshaw told The Daily Signal in an email. “I have been surprised by the number of people who wish to support us.”

The Sussex County Council is set to hold a public hearing Jan. 2 on its countywide proposal to bar forced union membership. Seaford, a city of 7,000 residents, is in southwestern Sussex County.

“The mayor and the council members in Seaford showed real courage and leadership in pressing ahead with a decision that is in the best interests of their community,” Sussex County Council member Rob Arlett told The Daily Signal in a phone interview Monday.

“Right to work is all about choice and about bringing more economic opportunity,” Arlett said.

A total of 28 states are right-to-work states, with Kentucky, Indiana, Michigan, Wisconsin, and West Virginia making the move since 2012. The U.S. territory of Guam also is a right-to-work jurisdiction.

Arlett has championed a right-to-work law for Delaware since at least April 2015, when he raised the subject during a council meeting in response to a bill in the state General Assembly that ultimately died.

In October, Arlett formally introduced a bill to make Sussex a right-to-work county in the absence of statewide action.

The action in Seaford, where the five council members are nonpartisan and the mayor doesn’t vote, adds momentum to that upcoming vote, he told The Daily Signal. “I have been surprised by the number of people who wish to support us,” Seaford Mayor David Genshaw says. (Photo: Kevin Mooney/The Daily Signal)

Three of his four colleagues on the all-Republican Sussex County Council have roots in Seaford, Arlett said, identifying them as George Cole, Irwin Burton, and council President Michael Vincent.

“They could take inspiration from the unanimous vote in Seaford,” he said. “The City Council is obviously responding to the needs of their constituents.”

After the Jan. 2 public hearing, the County Council may vote its right-to-work ordinance up or down, or defer action to a later date. The council also may amend the language.

“We are in the process of putting a team together and will probably do some sort of rollout [of the right-to-work law] in January,” Genshaw said. “Stay tuned.”

The western part of Sussex County, including Seaford, stands to benefit the most from a right-to-work law since the eastern part already boasts hotels and related businesses located along the beach areas, the mayor noted.

Genshaw expressed enthusiasm for right to work when The Daily Signal visited Seaford earlier in the year. The city was once home to a 35-acre DuPont nylon plant. The facility, which created thousands of local jobs, produced nylon used in military parachutes.