‘Scalia Speaks’: Remembering the Late Judge Through His Speeches 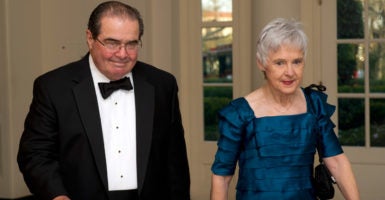 “This is just an important way to get dad’s ideas into as many people’s hands and minds and hearts as possible after his death,” says Christopher Scalia, the son of one of America’s most prominent conservative Supreme Court judges.

Scalia, along with Edward Whelan, the former justice’s law clerk, edited “Scalia Speaks,” a new anthology of some of his dad Justice Antonin Scalia’s speeches.

Since November 2016, Christopher Scalia and Whelan searched through nearly 200 written documents containing Justice Scalia’s speeches from through his entire career.

“We had basically several binders and a box of loose papers that we sorted through and read,” Christopher Scalia said at an event at The Heritage Foundation Nov. 7. He added that he and Whelan didn’t need to edit the speeches too much.

They took speeches that they felt would appeal to both lawyers and the general public as well as be relevant to the country’s current issues. Those speeches are compiled in their new book, “Scalia Speaks: Reflections on Law, Faith, and Life Well Lived.”

Christopher Scalia and Whelan organized Antonin Scalia’s speeches into six parts: statements about the American people and ethnicity; living and learning; faith; law; virtue and the public good; and the justice’s heroes and friends.

“The book contains brilliant explorations of the Constitution, originalism, and the role of judges … [and] deep reflections on citizenship, religion, and political philosophy,” Whelan said. “What I love the most about reading through his speeches and putting this book together is that you cannot read this book without Justice Scalia coming alive in your mind.”

Both Whelan and Christopher Scalia said that what made Justice Scalia such a powerful and intellectual speaker was his humor, his rich vocabulary, the intimacy of his delivery, and his desire to challenge and encourage critical thinking to everyone he spoke to.

One of Whelan’s favorite speeches was one Scalia gave to a Marine Corps air base in North Carolina.

“I had this speech, and scribbled on the top was, ‘Captain Dansak,’” Whelan said. “So I did a Google search and discovered that there’s a Catholic priest named Thomas Dansak … I called him up and we had a fun conversation. The people I was able to reach to talk about these speeches remember them like they were yesterday.”

One of Scalia’s favorite speeches was one his father gave in tribute to Emerson Spies, the late dean of the University of Virginia Law School. Scalia said Spies was a close friend of the family, to the point where his siblings called the dean their uncle.

Describing a cottage that Spies and he used to go to, Justice Scalia wrote:

“There, those who were fortunate enough to have experienced it will recall another aspect of Emerson’s life, Emerson the azalea grower. I suppose there are more impressive displays of azaleas somewhere, perhaps in the arboretum in Washington. But I have never enjoyed anything as much as the spring party Emerson used to throw for the faculty, when we would stroll through several acres of resplendent azaleas, gin and tonics in hand, taking in only slightly more pleasure in the flowers than we did in Emerson’s child-like delight in having produced them.”

Justice Antonin Scalia, who died in 2016, was appointed by former President Ronald Reagan in 1986 as an associate justice of the United States Supreme Court.