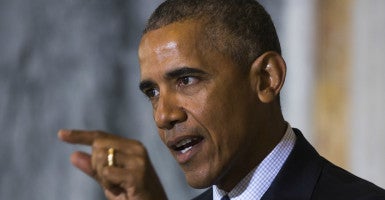 President Barack Obama explains why he won’t say “radical Islam,” asserting, “What exactly would using this label would accomplish? What exactly would it change? Would it make ISIL less committed to try to kill Americans?” (Photo: Jim LoScalzo/Zuma Press/Newscom)

Using the phrase “radical Islam” to describe the Islamic State or other jihadist groups will not win the war, but is nonetheless relevant in identifying the ideology—not the religion—that America is fighting, experts said.

“I don’t believe the phrase “Islamist extremism” or “Islamist terrorism” is some sort of incantation that’s going to fix everything,” Walter Lohman, director of the Asian Studies Center at The Heritage Foundation, said in an email to The Daily Signal.

“In fact, I don’t even think it’s the most important thing in this whole issue set. What’s most important are the policies that we pursue and the action that we take to defeat it, whatever you want to call it. But it does matter because we—Muslims, as much as other Americans—are engaged in a war of ideas as well as a war on terrorism.”

In a speech Tuesday, President Barack Obama roundly criticized Republicans who have insisted he use the words “radical Islam,” or “Islamist,” to describe the Islamic State.

“What exactly would using this label accomplish? What exactly would it change? Would it make ISIL less committed to try to kill Americans? Would it bring in more allies? Is there a military strategy that is served by this?” Obama said after meeting with his national security team. “The answer is none of the above. Calling a threat by a different name does not make it go away. This is a political distraction.”

Lohman, who last December hosted a forum, “Muslim Voices Against the Islamic State and Islamist Extremism,” said the point is to understand the ideology.

“Islamism is a political ideology and it has to be taken on,” Lohman continued in the email. “If we physically dissuade terrorists from hurting people, we still have to stop Islamists from coercing people into their way of thinking by other means. Actually identifying the ideology is key to that, and unfortunately, that ideology is cast in religious terms. It’s like a Muslim civil society leader in Indonesia told me one time talking about the much more serious threat in her own country, ‘What difference does it make whether they are terrorists or not. They (Islamists) all want the same thing.’”

White House press secretary Josh Earnest later added that, “It is not uncommon on cable TV to see some GOP congressman I’ve never heard of demand to know why the president doesn’t say ‘radical Islam.’”

During his remarks, Obama said, “Not once has an adviser of mine said, ‘Man, if we use that phrase, we are going to turn this whole thing around.’” The president added that the United States doesn’t want to feed the Islamic State’s narrative that the militant group represents true Islam.

“Since before I was president, I have been clear about how extremist groups have perverted Islam to justify terrorism,” Obama said. “As president, I have called on our Muslim friends and allies at home and around the world to work with us to reject this twisted interpretation of one of the world’s great religions.”

But the “radical” in “radical Islam” is an obvious distinction from mainstream Islam, and it’s Obama that doesn’t seem to recognize that, said James Carafano, vice president for the Kathryn and Shelby Cullom Davis Institute at The Heritage Foundation.

“A label may seem superficial. American soldiers in Normandy didn’t care whether they were fighting Germans or Nazis,” Carafano told The Daily Signal. “The real fear is that the president is not prosecuting the war to win. It’s horrible to imply using the word ‘Islam’ is racist. ‘Radical Islam’ refers to an Islamist ideology, and is by definition a distinction from Islam.”