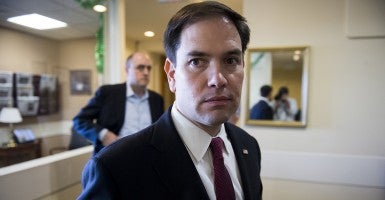 The Florida Republican and potential 2016 presidential candidate introduced legislation yesterday that would completely defund the Justice Department program while protecting gun sellers and manufacturers from future attempts to eradicate the industry.

“It has become clear that the FDIC and the Department of Justice can no longer be trusted to carry out Operation Choke Point without targeting the Second Amendment and firearms dealers and manufactures,” said Rubio in a press release. “We must stop this administration’s effort to target private industries and the Second Amendment rights of law-abiding citizens.”

Operation Choke Point was designed by the Justice Department in 2012 to “reduce dramatically mass market consumer fraud” by blocking their access to bank accounts and other financial institutions. Whether intentional or not, the initiative affected a range of legal and legitimate industries, including firearms sellers and payday lenders.

Much of the criticism about the program resulted from a 2011 list that was created inside the Federal Deposit Insurance Corp. (FDIC) and subsequently adopted by Operation Choke Point. The FDIC list labeled a range of both legal and illegal industries “high risk,” and the agency advised banks against doing business with those enterprises.

Although the FDIC has since removed that list and walked back its involvement in Operation Choke Point, industry insiders believe the operation still poses a serious threat to business owners and that legislation is needed to protect firearms sellers’ Second Amendment rights.

Rubio’s legislation, the Firearms Manufacturers and Dealers Protection Act of 2015 (S. 477), would prohibit funds to be used by the Justice Department or the FDIC to carry out Operation Choke Point “or any other program designed to discourage the provision or continuation of credit or the processing of payments for dealers and manufactures of firearms and ammunition.”

It is endorsed by two of the nation’s leading gun advocates, the National Rifle Association and the Gun Owners of America, and also has the support of U.S. Consumer Coalition, a Washington, D.C.-based organization that has been leading the fight against Operation Choke Point.

We now need Senator Rubio’s colleagues to show their support for America’s consumers and join him in pushing back against Operation Choke Point. This legislation provides an opportunity for Senate Minority Leader Harry Reid to put his support for Second Amendment rights ahead of partisan politics and show the president that programs like Operation Choke Point will not have the support of either party in the Senate.

The Justice Department has not returned multiple requests for comment from The Daily Signal regarding Choke Point and how many taxpayer dollars are used to fund the operation.

Ira Goodstadt, a Florida resident who has witnessed the effects of Choke Point firsthand, told The Daily Signal he was relieved to hear his senator take on the issue in Congress.

“This is a great bill,” he said. “It will prevent political hacks from intruding on the rights of businesses who follow the law.”

Goodstadt created an online payment platform specifically for gun sellers called PistolPay.com, which operates with the support of Merchant Services LTD. While at the 2015 Shot Show in Las Vegas in January, Goodstadt told The Daily Signal that he receives new customers on a regular basis as a result of Operation Choke Point’s blocking them from mainstream processors like PayPal, Square and Stripe.

“My business has grown due to Choke Point but the firearms community is my community and although it helps me on one side, it hurts others I know unfairly,” said Goodstadt.