The US Army, 245 Years Strong and Still True to Its Roots 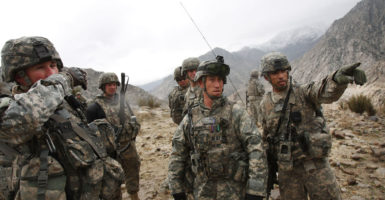 The U.S. Army has been steadfastly guided by the principles of duty, honor, and integrity, and all Americans should be rightly proud of it. Pictured: Members of the U.S. Army 1-6 Field Artillery division conduct a joint military exercise with the Afghan National Army Feb. 23, 2009, in the Shemgal Valley in Nuristan Province, Afghanistan. (Photo: Spencer Platt/Getty Images)

Born even before the Declaration of Independence was written in 1776, the Army marks its birthday from June 14, 1775, when the Continental Congress directed “[t]hat six companies of expert riflemen, be immediately raised in Pennsylvania, two in Maryland, and two in Virginia … [and] as soon as completed, shall march and join the army near Boston, to be there employed as light infantry, under the command of the chief Officer in that army.”

Since then, the story of the Army essentially has been the story of our nation. Fighting our nation’s battles and wars, and protecting the rights and liberties of the American people have been its responsibility, which it takes seriously.

For every major campaign in which the Army has engaged, a streamer—essentially a thin embroidered strip of fabric—was added to the Army flag. The first one added was for the Battle of Lexington on April 19, 1775, while the most recent one added was for Operation Inherent Resolve, the military intervention against the Islamic State, or ISIS.

In between these two streamers are 188 others, each representing the commitment and sacrifice of the men and women of the Army.

There are, for example, 38 streamers associated with World War II, one of them representing Burma in 1942, and 17 associated with the Vietnam War, with campaigns such as the Tet Counteroffensive in 1968.

However, not all Army operations are captured in streamers.

In 1871, President Ulysses S. Grant sent the Army and federal marshals into South Carolina to crack down on rampant violence being committed by the Ku Klux Klan against black citizens. In that regard, he was successful in crippling Klan efforts throughout the state.

In 1957, the Army—in the form of 1,000 troops from the 101st Airborne Division—was called upon by President Dwight Eisenhower to maintain order in Little Rock, Arkansas, as the Central High School was desegregated, and to protect the famous “Little Rock Nine,” nine black students who figuratively and literally broke down barriers.

In 1965, President Lyndon Johnson deployed 2,000 active-duty Army and 1,900 federalized National Guard soldiers to protect protesters on their march from Selma to Montgomery in Alabama following earlier brutal attacks by police on marchers. With the protection of the Army, the marchers arrived safely.

While not recognized by a streamer, those missions by the Army to protect the rights of citizens granted under the Constitution reflect an institution dedicated to freedom and liberty.

In these times of turmoil in our cities, some have fretted that the military and the Army could be employed to deny—as opposed to protect—American citizens’ inherent rights to assemble and of free speech.

Those familiar with the Army’s 245 years of history have no such concerns. For an institution that has fought for the nation’s freedoms for nearly two and a half centuries, such a thought is inconceivable.

The Army is not perfect. Like other human endeavors, mistakes can be and are made. But the Army is a self-correcting organization, and when it finds errors, it usually fixes them quickly.

It’s been steadfastly guided by the principles of duty, honor, and integrity, and all Americans should be rightly proud of their Army.