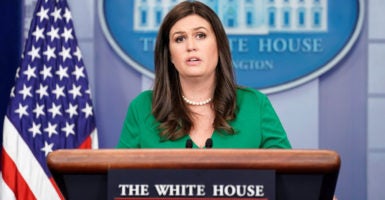 The White House, saying Congress should support religious freedom, came to the defense of a judicial nominee who has been attacked by Democrat senators and The New York Times because of her Catholic faith.

“We certainly support religious freedom and would ask that Congress also support that as well,” @PressSec says.

“We certainly support religious freedom and would ask that Congress also support that as well,” Sanders replied during a press briefing Monday at the White House.

Why is it that so many of us on this side have this very uncomfortable feeling that—you know, dogma and law are two different things. And I think whatever a religion is, it has its own dogma. The law is totally different. And I think in your case, professor, when you read your speeches, the conclusion one draws is that the dogma lives loudly within you, and that’s of concern when you come to big issues that large numbers of people have fought for years in this country.

“Some of the group’s practices would surprise many faithful Catholics,” the Times article asserted:

Members of the group swear a lifelong oath of loyalty, called a covenant, to one another, and are assigned and are accountable to a personal adviser, called a ‘head’ for men and a ‘handmaid’ for women. The group teaches that husbands are the heads of their wives and should take authority over the family.

Current and former members say that the heads and handmaids give direction on important decisions, including whom to date or marry, where to live, whether to take a job or buy a home, and how to raise children.

Two university presidents—the Rev. John I. Jenkins of the University of Notre Dame, and Christopher L. Eisgruber of Princeton University—called out Feinstein’s comments in a letter of protest to the Judiciary Committee.

Barrett awaits a committee vote on her confirmation.

A graduate of Notre Dame Law School, Barrett worked in private practice. She served on the legal team representing George W. Bush in the Bush v. Gore case that went to the Supreme Court to settle the 2000 presidential election.

She later taught law at George Washington University and the University of Virginia before joining the Notre Dame faculty in 2002. In 2010, Supreme Court Chief Justice John Roberts named Barrett to an advisory committee on the appeals process.