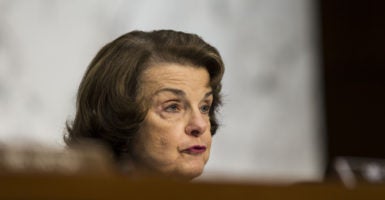 "When you read your speeches, the conclusion one draws is that the dogma lives loudly within you, and that's of concern when you come to big issues that large numbers of people have fought for, for years in this country," Sen. Dianne Feinstein, D-Calif., said during a Sept. 6 hearing. (Photo: Alex Edelman/ZUMA Press/Newscom )

Two presidents of prestigious educational institutions have come to the defense of a Catholic nominee for an appeals court after she was questioned by a United States senator about her faith during a Senate confirmation hearing.

In two separate letters, the Rev. John I. Jenkins, president of the University of Notre Dame, and Christopher L. Eisgruber, president of Princeton University, wrote to Sen. Dianne Feinstein, D-Calif., expressing concern about how Feinstein questioned Amy Coney Barrett, a faculty member of Notre Dame and nominee to the U.S. Court of Appeals for the 7th Circuit.

“It is chilling to hear from a United States senator that this might now disqualify someone from service as a federal judge,” Jenkins wrote in his Sept. 9 letter.

“When you read your speeches, the conclusion one draws is that the dogma lives loudly within you, and that’s of concern when you come to big issues that large numbers of people have fought for, for years in this country,” Feinstein said Sept. 6 during the hearing.

In the ’90s, Barrett co-authored a controversial article on the death penalty.

As a person of faith himself, Jenkins said he shares the same faith and convictions of Barrett.

“I am one in whose heart ‘dogma lives loudly,’ as it has for centuries in the lives of many Americans, some of whom have given their lives in service to this nation,” Jenkins wrote. “Indeed, it lived loudly in the hearts of those who founded our nation as one where citizens could practice their faith freely and without apology.”

Eisgruber, Princeton University’s president, said Feinstein’s questioning was not consistent with the Constitution.

“Article VI of the United States Constitution provides explicitly that ‘no religious test shall ever be required as a qualification to any office or public trust under the United States,’” Eisgruber wrote. “This bold endorsement of religious freedom was among the original Constitution’s most pathbreaking provisions.”

“Do you consider yourself an orthodox Catholic?” Durbin said.

“I am deeply concerned by the harsh and often unfair criticisms that are now routinely levelled from both sides of the political spectrum against distinguished judicial nominees who would serve this country honorably and well,” Eisgruber wrote, adding:

On the basis of her accomplishments and scholarly writing, I believe that Professor Barrett is in that category. She and other nominees ought in any event to be evaluated on the basis of their professional ability and jurisprudential philosophy, not their religion: every senator and every American should cherish and safeguard vigorously the freedom guaranteed by the inspiring principle set forth in Article VI of the United States Constitution.

Jenkins also said judges should be evaluated based on their merits, not religious conviction.

“Professor Barrett has made it clear that she would “follow unflinchingly” all legal precedent and, in rare cases in which her conscience would not allow her to do so, she would recuse herself,” Jenkins wrote. “I can assure you that she is a person of integrity who acts in accord with the principles she articulates.”

In June, Sen. Bernie Sanders, I-Vt., came under fire for questioning the Christian beliefs of Russell Vought, President Donald Trump’s nominee to be deputy director of the White House Office of Management and Budget, as The Daily Signal previously reported.

Vought formerly was employed by Heritage Action for America, the lobbying affiliate of The Heritage Foundation.

Barrett graduated from Notre Dame’s law school and has worked as a professor at Notre Dame since 2002. She also clerked for Judge Laurence H. Silberman of the U.S. Court of Appeals for the D.C. Circuit and for the late Associate Justice Antonin Scalia of the United States Supreme Court.