Flashback to 1992: When Democrats Halted a Republican President’s Judicial Nominees 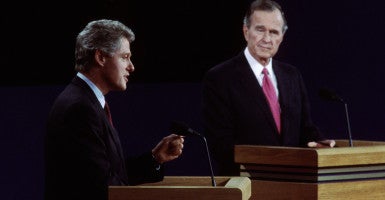 If Senate Democrats get their way, Republicans won’t follow their example. That is, Senate Republicans in 2016 won’t act as Democrats did when they blocked court confirmations in 1992.

Twenty-four years ago looked a lot like the inverse of today. On the eve of a presidential election, there was a Republican in the White House and a Democrat majority in the Senate.

Now those roles are reversed—and so is the Democrat perspective on judicial nominees.

Rather than confirming President George H.W. Bush’s picks for federal judgeships, The New York Times from Sept. 1, 1992, reports, Senate Democrats delayed nominees “to preserve the vacancies for [Arkansas] Gov. Bill Clinton to fill if he is elected president.”

In an era before widespread use of the Internet, “none of the senators urging a shutdown” for Bush nominees would go on the record or register his opinion publicly with The New York Times.

According to Senate roll call votes from 1992, only one Bush judicial nominee received a vote after The New York Times published that story.

Edward Carnes, nominated by Bush in January 1992 and later filibustered by Democrats, won confirmation to the U.S. Court of Appeals for the 11th Circuit on a vote of 62-36 on Sept. 9, 1992. He was the final nominee confirmed under Bush.

Another Bush nominee at the time was John G. Roberts, now chief justice of the Supreme Court. In 1992, the Senate opted not to vote on Roberts’ nomination to the U.S. Court of Appeals for the District of Columbia Circuit. Without Senate action, his nomination was left to expire.

“We told him it was very unsettling, even incredible, that the Senate should continue to consider these people as if it were business as usual,” Conyers told the newspaper.

In the minority today, Senate Democrats have shifted their opinion at news that Republicans intend to leave vacant the seat of Supreme Court Justice Antonin Scalia, a conservative who died Saturday.

Senate Democrats, led by Minority Leader Harry Reid, D-Nev., and Chuck Schumer, D-N.Y., have accused Republicans of dereliction of their constitutional duty to advise and consent on judicial nominees.

In an op-ed Monday in The Washington Post, Reid criticized Senate Republicans for engaging in “partisan sabotage” after Majority Leader Mitch McConnell, R-Ky., announced he wouldn’t move an Obama nominee to the court.

Reid predicted that Republicans would be “remembered as the most nakedly partisan, obstructionist, and irresponsible majority in history.”

Edward Whelan, president of the Washington-based Ethics and Public Policy Center, told The Daily Signal that Democrats have done “the same thing Republicans are doing now.”

A Supreme Court clerk for Scalia in the 1990s, Whelan said he sees this back-and-forth as par for the course.

“The confirmation process is inherently political,” he said. “Especially when you’re talking about transformational seats, it’s all the more intense.”