McConnell Wants to Ditch the Blue Slip for Judicial Nominees, and He’s Right 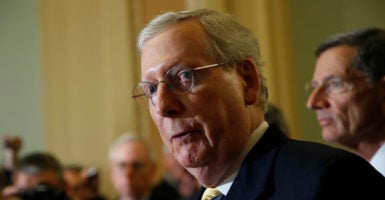 Senate Majority Leader Mitch McConnell, R-Ky., supports an important step toward fixing the backlog of judicial nominations that are piling up in the Senate.

McConnell told The Weekly Standard that blue slips—the practice of asking senators from a nominee’s home state for their opinion before the Senate Judiciary Committee holds a hearing—should no longer be used to bring a confirmation to a crashing halt.

Instead, they should be treated as “simply notification of how [a senator is] going to vote, not as an opportunity to blackball.”

Soon after, however, Senate Judiciary Committee Chairman Chuck Grassley, R-Iowa, stated that ditching the blue slip is his call to make, not McConnell’s.

Grassley did not refuse to ultimately change the practice, but he wasn’t enthusiastic about McConnell’s plan. Grassley’s spokesperson indicated that, at this point, the chairman would respond to “abuses” of blue slips on a “case-by-case basis.”

>>> Stay up to date with the latest at the Supreme Court by checking out SCOTUS 101, a podcast hosted by Heritage Foundation scholars Elizabeth Slattery and Tiffany Bates. You can listen on iTunes, SoundCloud, or Stitcher.

Blue slips have a long history, dating back to 1917. As part of the process for evaluating a judicial nominee, the chairman of the Senate Judiciary Committee would ask senators from the nominee’s home state to select “I approve” or “I object” on a blue slip of paper.

The rationale was that home state senators may be more familiar with a nominee and have better insights into his or her suitability for a judgeship.

Except for a brief period in the 1960s and ‘70s, blue slips were never used as a way to veto nominees. Unfortunately, some Democratic senators have recently refused to turn in their blue slips in an attempt to prevent or delay the confirmation of conservative judges.

McConnell’s proposed change would be welcome news for David Stras, Michael Brennan, and Ryan Bounds—three nominees to federal appeals courts who have been waylaid by Democrat senators seeking to block their confirmations.

While the blue slip tradition remains in limbo for now, it’s not the only problem judicial nominees face. Once they are voted out of committee, many nominees have languished without a vote by the full Senate.

Fortunately, McConnell also made clear that confirming judicial nominees will be a top priority going forward. He said, “I guarantee they will be dealt with … [r]egardless of what tactics are used by Democrats, the judges are going to be confirmed.”

>>> How to Stop Democrats From Stonewalling Judicial Nominees

Judicial nominees aren’t the only ones waiting for a vote, but McConnell further explained, “Priority between an assistant secretary of state and a conservative court judge—it’s not a hard choice to make.” Federal judgeships are, after all, lifetime positions.

To date, the Senate has confirmed only seven judges, including Supreme Court Justice Neil Gorsuch. Meanwhile, 53 nominations are still pending, and the president is sending more nominees to the Senate each month, working to fill more than 160 vacancies.

At bottom, the Senate needs to get to work holding hearings and confirming these roughly five dozen nominees.

Whether Grassley gets on board with McConnell’s plan or deals with the Democrats who are stonewalling nominees on a “case-by-case basis,” he needs to take steps to ensure the president’s highly qualified nominees are confirmed to the bench expeditiously.