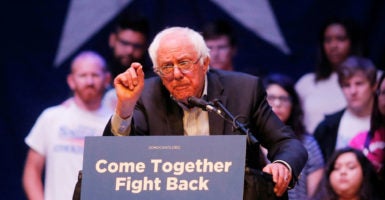 Tens of thousands of Christians want an apology from Sen. Bernie Sanders, I-Vt., for his public attack on the Christian faith of President Donald Trump’s nominee to a budget post. Sanders is pictured at Texas Democrats' "Come Together and Fight Back" event in April. (Photo: Rodger Mallison /TNS/Newscom)

Over 50,000 individuals so far have signed an online petition asking Sen. Bernie Sanders, I-Vt., to apologize for his public attack on the Christian beliefs of President Donald Trump’s nominee for a post in the Office of Management and Budget.

Sanders “responded in anger after Russell Vought, President Trump’s nominee to be deputy director of the White House Office of Management and Budget, answered a question about his belief that salvation is found alone through Jesus Christ,”  the petition drafted by the Family Research Council, a Washington-based conservative policy organization, reads.

Tony Perkins, president of the Family Research Council, told The Daily Signal in an interview Tuesday that Sanders’ comments during Vought’s hearing June 7 before the Senate Budget Committee showed intolerance to religious freedom.

“I think what we saw from Bernie Sanders last week was just a blatant display of religious bigotry and intolerance,” Perkins said.

Sanders’ behavior, he said, is offensive to Americans of all backgrounds.

“The American people, whether or not they are people of faith, should just say, ‘He absolutely crossed the line, it should not be tolerated, and someone in his position imposing such a reverse or religious test … should not be accepted,” Perkins said.

The online petition drive, launched June 8, asks Sanders to apologize for the comments he made to Vought about his belief in the Christian doctrine of salvation through Jesus Christ alone.

By signing this petition, you are asking Senator Sanders to apologize for his bigotry and asking his Senate colleagues to immediately pledge that they will not oppose nominees on the basis of their religious views.

The exchange between Sanders and Vought occurred when the senator questioned the OMB nominee about an article Vought wrote on Muslim theology.

Absolutely not, Senator. I’m a Christian, and I believe in a Christian set of principles based on my faith. That post, as I stated in the questionnaire to this committee, was to defend my alma mater, Wheaton College, a Christian school that has a statement of faith that includes the centrality of Jesus Christ for salvation.

Sanders, 75, cut off Vought at that point, and later said he “is really not someone who this country is supposed to be about.”

It is disturbing that Sanders’ behavior has not seen widespread coverage from long-established media outlets, Perkins told The Daily Signal:

Sanders lost the Democratic nomination for president to Hillary Clinton but remains a leader of the party’s far-left wing. He was raised in the Jewish faith but has described himself as not particularly religious.

“The left has become so emboldened in their religious hostility in the wake of [President Barack] Obama’s administration, and they have the cover of the media,” Perkins said, adding:

This shows the American people how tenuous these freedoms are—our fundamental freedoms, religious freedom, freedom of speech—and that we absolutely must send a message that this will not be tolerated.