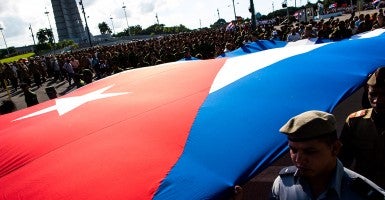 On the day when millions of Americans were exercising their sovereign right to elect their leaders, a blind Cuban dissident who’s never been able to cast a vote in his life was in Washington with a simple message for The New York Times.

The New York Times has for decades echoed Cuban dictator Fidel Castro’s call for an end to the embargo, but has stepped up this campaign to almost an obsessive level since hiring Ernesto Londoño as editorial writer back in July. To many long-time Cuba watchers it is as though the ghost of Times foreign correspondent Herbert Matthews has returned.

More than any other journalist, Matthews is rightly blamed for making Castro palatable to the Eisenhower administration and to America at large. Among his most infamous quotes on Castro was his 1959 observation, “This is not a Communist Revolution in any sense of the term. Fidel Castro is not only not a Communist, he is decidedly anti-Communist.”

One would think that, with this record, the Times would be a bit contrite. But no. Just yesterday it once again echoed another long-standing demand of the Castros, calling for the swap of three Cuban spies serving well-deserved prison sentences here for Alan Gross, the USAID contractor thrown into a Cuban prison for giving computers to members of Cuba’s Jewish community.

Gonzalez Leiva, who describes his two years in a Cuban prison—into which he was thrown for daring to write Fidel Castro a letter asking for freedom—as “the devil having his way with you for [a couple of years],” said the New York Times should send reporters to Cuba and interview dissidents. “Let them interview me,” he said. Better yet, he said, the Times should ask for access to Cuban prisons and interview the political prisoners there.

Cuba’s economy doesn’t work because when a dairy farmer succeeds and goes from two cows to 10, the government comes in and confiscates eight or nine, he said, and in an island surrounded by water Cubans are not allowed to fish. Lifting the embargo, said Gonzalez Leiva, would give the Castros’s communist dictatorship—for Mathews was tragically wrong there—access to international credit markets it needs to survive at this point.

“Communism has made Cuba a parasite, first of the Soviet Union and now of Venezuela. Without communism we would be prosperous once again, as prosperous as Miami,” said Gonzalez Leiva. “Don’t lift the embargo until all political prisoners are out of prison, until civil society is recognized and free speech is allowed.”

It’s a message we should all welcome on this most hallowed day of democracy.