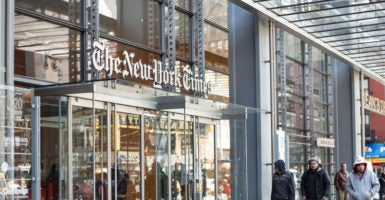 “I feel pretty strongly that New York Times journalists should not be able to say anything on social media that they cannot say either in the pages or in any of the platforms of The New York Times,” Executive Editor Dean Baquet says. (Photo: iStock Photos)

“I feel pretty strongly that New York Times journalists should not be able to say anything on social media that they cannot say either in the pages or in any of the platforms of The New York Times,” Executive Editor Dean Baquet said during a panel discussion on covering the Trump administration at George Washington University.

The New York Times’ journalists are frequently criticized for appearing to express bias in tweets about the president, and that’s making Baquet’s job of trying to cover the administration without the appearance of bias a lot harder. Baquet said he’s “spent full days” and weekends “policing our social media.”

Baquet wants to cover the Trump administration “aggressively, but with fairness,” and to do that he needs reporters to avoid sharing opinions that betray their dislike for the president and his policies.

The editor said he wants to be able to tell the world “we’re doing this because it’s journalistically sound, we’re not doing this because we have vendetta or [because] we’re trying to take him out, and I can’t do that if I have 100 people working for The New York Times sending inappropriate tweets.”

Editor’s note: On Friday, The New York Times published updated, expanded guidelines for all newsroom employees who use social media, along with a memo from Baquet.