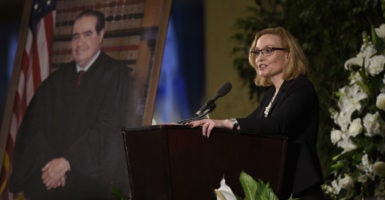 Joan Larsen, a justice on the Michigan Supreme Court, speaks March 1, 2016, at the memorial service for Supreme Court Justice Antonin Scalia at the Mayflower Hotel in Washington. Larsen, a former law clerk for Scalia, is waiting for the Senate to act on President Donald Trump's nomination of her as a federal appeals court judge. (Photo: SusanWalsh/ZumaPress/Newscom)

President Donald Trump’s nominations for judgeships on federal courts have been excellent so far, and his just-announced nominees to fill four appeals court vacancies in Texas and Louisiana are no exception.

The four are among a slate of new judicial nominations rolled out Thursday by the president as he makes steady progress toward filling more than 160 current and future vacancies on the federal courts.

While Trump announces more and more outstanding nominees, they are, unfortunately, piling up in the Senate. The chamber has confirmed only seven judges (including Supreme Court Justice Neil Gorsuch) this year.

Part of the problem is the Senate Judiciary Committee’s policy, known as “blue slips,” which asks the two senators from a nominee’s home state for their opinion before the committee holds a hearing or further evaluates the nominee.

Senators select “I approve” or “I object” on a blue slip of paper. The president has the power to appoint judges—with the advice and consent of the Senate—but under this 100-year-old tradition, a single senator may be able to bring a confirmation to a crashing halt.

Sen. Chuck Grassley, R-Iowa, chairman of the Judiciary Committee, should not let this obstruction continue. Instead, he should ditch the blue-slip practice for appellate nominees.

Before specifying earlier judicial nominees who are yet to be confirmed, often because of blue slips, let’s look at Trump’s four new nominees to the 5th U.S. Circuit Court of Appeals:

1. Kyle Duncan is a seasoned attorney in private practice in Washington, D.C. He served as Louisiana’s first solicitor general and general counsel for Becket Law when the firm represented Hobby Lobby in its challenge to Obamacare’s contraceptive mandate. Duncan has argued cases in more than 30 federal and state appellate courts, including the U.S. Supreme Court. Duncan, who also was a professor at the University of Mississippi School of Law, is the president’s pick for a Louisiana seat on the 5th Circuit. Louisiana’s two senators are Republicans Bill Cassidy and John Kennedy.

2. Kurt Engelhardt, chief judge of the Eastern District of Louisiana, has served as a district court judge since his nomination by President George W. Bush in 2001. Prior to that, he was in private practice. Engelhardt made headlines for taking the Obama Justice Department to task for leaking grand jury information while prosecuting police officers who shot six unarmed individuals in the aftermath of Hurricane Katrina. Trump nominated him to fill another Louisiana seat.

3. Don Willett is a justice on the Texas Supreme Court who is known as the “Tweeter Laureate of Texas” for his entertaining social media presence. Despite this playful side, Willett is a thoughtful jurist with more than a decade of experience on the bench. Willett was included on Trump’s list of potential Supreme Court nominees—and he earned a spot on The Heritage Foundation’s list as well. He is the president’s choice for a vacancy in Texas, which has two Republican senators, John Cornyn and Ted Cruz.

4. James Ho, a partner at the Dallas office of Gibson Dunn, previously served as solicitor general of Texas. In that post, he received two Best Brief Awards from the National Association of Attorneys General. Ho also served in the Justice Department’s Office of Legal Counsel during the George W. Bush administration, and clerked for Justice Clarence Thomas. He is slated to fill another Texas seat.

While we don’t expect these four nominees to the Texas and Louisiana seats on the 5th Circuit to face blue-slip problems, the same cannot be said of all the other nominees announced earlier this year.

Here’s a look at 10 nominees for federal judgeships who are waiting for a Senate hearing or vote:

1. Stephanos Bibas, a professor of law and criminology at the University of Pennsylvania Law School, was nominated to the 3rd Circuit in June. Bibas is one of our nation’s leading criminal law experts, and runs a clinic at U Penn for students to participate in Supreme Court cases. Pennsylvania has one Democrat senator, Bob Casey Jr., and one Republican, Pat Toomey. Bibas’ hearing before the Judiciary Committee is scheduled for Oct. 4, so he has cleared potential blue-slip hurdles.

2. Joan Larsen is a Michigan Supreme Court justice nominated to the 6th Circuit. After some delay, likely influenced by the fact that she is on Trump’s list of potential Supreme Court nominees, Michigan’s two Democrat senators, Debbie Stabenow and Gary Peters, returned their blue slips. Larsen, a former clerk to the late U.S. Supreme Court Justice Antonin Scalia, appeared before the Judiciary Committee for a Sept. 6 confirmation hearing and awaits a committee vote.

3. Michael Brennan, an attorney in private practice in Milwaukee, was nominated in August for the 7th Circuit. Sen. Tammy Baldwin, a Democrat, announced that she is “extremely troubled” by Trump’s “partisan approach” in not deferring to Wisconsin’s judicial selection committee. Ron Johnson, a Republican, is Wisconsin’s other senator.

4. Amy Coney Barrett, a law professor at Notre Dame, also was named to the 7th Circuit. While Sen. Joe Donnelly, D-Ind., dragged his feet over the summer, he eventually joined Sen. Todd Young, R-Ind., in returning the blue slip. You may recall that at Barrett’s confirmation hearing in September, Democrats asked inappropriate questions about her Catholic faith. She awaits a committee vote.

5. David Stras, a Minnesota Supreme Court justice, was nominated in May to the 8th Circuit. Sen. Amy Klobuchar issued a statement calling for a hearing for Stras (though she wouldn’t have picked him), but her fellow Minnesota Democrat, Sen. Al Franken, announced he would not return his blue slip. Franken said Stras “would be a deeply conservative jurist in the mold of Supreme Court Justices Clarence Thomas and Antonin Scalia.” Stras is also on Trump’s short list for the Supreme Court.

6. Steve Grasz, a lawyer in private practice in Omaha, Nebraska, previously served in the Nebraska Attorney General’s Office, where his cases included defending the state’s partial-birth abortion ban before the Supreme Court. Grasz was nominated to the 8th Circuit in August. The state’s senators, Ben Sasse and Deb Fischer, are both Republicans.

7. Ryan Bounds, a federal prosecutor in Oregon, is a nominee for the 9th Circuit. He worked in George W. Bush’s Office of Legal Counsel and clerked for a conservative powerhouse, Judge Diarmuid O’Scannlain. Sens. Ron Wyden and Jeff Merkley, both Democrats, had another individual in mind for the vacancy, so they informed the White House they intended to block Bounds’ confirmation.

8. Allison Eid is a Colorado Supreme Court justice and nominee to the 10th Circuit seat vacated by Gorsuch. Also on Trump’s Supreme Court list, she previously served as Colorado’s solicitor general and is a former clerk for Justice Clarence Thomas. Her confirmation hearing was in September, and she awaits a committee vote.

9. Lisa Branch, a Georgia state court judge, was nominated to the 11th Circuit in September. She is another Bush administration alum, having served in both the Department of Homeland Security and the Office of Management and Budget. Georgia’s senators, David Perdue and Johnny Isakson, are both Republicans.

10. Greg Katsas, deputy White House counsel, was nominated for the D.C. Circuit. Formerly a partner at the D.C.-based law firm Jones Day, Katsas has argued cases before the Supreme Court, including the first Obamacare challenge, NFIB v. Sebelius. He held several posts in the Justice Department during the Bush administration and also clerked for Thomas. Since no senators represent the District of Columbia, he doesn’t need to worry about blue slips.

We applaud the president’s selection of these tremendous individuals for vacancies on the federal appeals courts.

But they are just the tip of the iceberg. With more than 160 vacancies to fill, senators need to stop stonewalling and get to work confirming these highly qualified, conservative nominees.