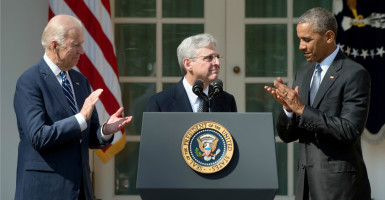 Over 100 conservatives from 29 states and Washington, D.C., voiced their support for Senate Republicans in a memo commending them for their resistance to any Supreme Court nominee put forward by President Barack Obama.

As it turned out, Obama on Wednesday nominated a federal appeals court judge, Merrick Garland, to fill the vacant seat left by the death of Antonin Scalia.

The memo also suggests that any Obama pick for the Supreme Court would unleash “unaccountable federal agencies,” such as the Internal Revenue Service and the Environmental Protection Agency, to “impose a liberal policy agenda that will harm Americans and punish any who dare to disagree with their worldview.”

The conservative leaders also suggest that a justice named by Obama would impose an “unconditional surrender” in liberals’ “culture war against our fundamental institutions of faith, family, marriage, home and school.” They write:

We are facing a national constitutional crisis. Senate Republicans have recognized the stakes and have acted accordingly. As conservatives, we strongly support them and their principled stand in favor of the Constitution.

So far, 111 prominent conservatives, representing 94 groups, have added their signatures to the memo.

Among them is Michael Needham, CEO of Heritage Action for America, the lobbying arm of The Heritage Foundation.

Other organizations with representatives who signed include the Family Research Council, the American Conservative Union, FreedomWorks, the Americans for Tax Reform, the American Civil Rights Union, Students for Life, the Home School Legal Defense Association, and National Religious Broadcasters. Also on the list is The Washington Times.

“We will continue to collect signatures and release updated versions of this memo as necessary,” Dunlop, chairwoman of the Conservative Action Project, said, adding: “The material contained in the memos provides important information and we are interested in it being shared widely to have a more well-informed citizenry.”

“Let us remember that Justice Scalia was an exceptional jurist with unwavering commitment to the integrity of the United States Constitution,” signer Jerry A. Johnson, president and CEO of National Religious Broadcasters, said in a formal statement Wednesday.

“The American people should at least have a chance to vote in November before this president gets to place a third and likely generational-altering pick on the court,” he said.