The Next Supreme Court Justice 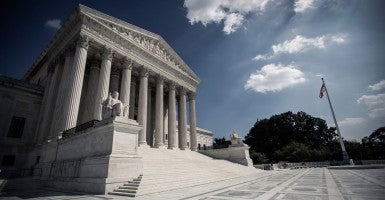 The next U.S. president could appoint up to four Supreme Court justices and reshape the federal judiciary. (Photo: iStockPhoto)

By the time the next president takes the oath of office on Jan. 20, 2017, Justice Ruth Bader Ginsburg will be 83 years old, Justice Anthony Kennedy will be 80 years old, and Justice Stephen Breyer will be 78 years old. And while I wish them all continued good health, it is a fact that the average life expectancy in this country is 76.30 years for males and 81.30 years for females.

Assuming thatthe next president serves an eight-year term, he or she could end up appointing one-third or more of the federal district court and appeals court judges. That is also worth bearing in mind when one considers that only a small fraction of cases end up getting reviewed by the Supreme Court.

In other words, a judge should interpret the text and structure of a statute or the Constitution, based on the original public meaning of that text at the time it was adopted, and should not, under the guise of statutory or constitutional interpretation, impose on the rest of society his or her own policy predilections based on that judge’s perceptions of contemporary mores. As President Ronald Reagan so eloquently stated at the investiture ceremony for Justice Anthony Kennedy:

[T]he role assigned to judges in our system was to interpret the Constitution and lesser laws, not to make them. It was to protect the integrity of the Constitution, not to add to it or subtract from it—certainly not to rewrite it. For as the framers knew, unless judges are bound by the text of the Constitution, we will, in fact, no longer have a government of laws, but of men and women who are judges. And if that happens, the words of the documents that we think govern us will be just masks for the personal and capricious rule of a small elite.

In addition to an in-depth knowledge of the law and a settled judicial philosophy, a judge must have the backbone to withstand the inevitable onslaught of withering criticism from the mainstream media and the societal elites, cognoscenti, and other habitués who frequent the Georgetown and New York cocktail circuits without moderating his or her view to please them. Although he was speaking about his religious beliefs at the time, Scalia’s words could just as easily apply to conservative judges: “Have the courage to have your wisdom regarded as stupidity. … And have the courage to suffer the contempt of the sophisticated world.”

While there are a number of well-respected organizations within the conservative movement whose views should be solicited and considered, the following non-exclusive list of current judges illustrates the kind of highly qualified, principled individuals the new president should consider—after a thorough review of their backgrounds, records, legal acumen, judicial philosophies, and intestinal fortitude—for nomination to the Supreme Court.

The former Alabama attorney general made headlines in 2004 when President George W. Bush recess appointed him to the 11th U.S. Circuit Court of Appeals in Atlanta, where he was subsequently confirmed. While he was considered by some as controversial in 2004, during his 12 years on the bench, Pryor has established himself as a serious and thoughtful jurist, and has written on a variety of important issues. He is also a member of the U.S. Sentencing Commission.

A former state trial court judge and Wisconsin Supreme Court justice, Sykes was confirmed to the 7th Circuit in 2004. In an interview in 2000, when she was still on the Wisconsin Supreme Court, Sykes told the Wisconsin Lawyer: “I will try very hard not to be a results-oriented jurist who figures out how he or she wants the case to come out and then makes the law fit that result. Rather, I’ll start at the beginning of the legal analysis and work outward from there.” Since joining the federal bench, Sykes has written several thoughtful, well-reasoned opinions in cases involving religious freedom, gun rights, and political speech.

A former clerk to Chief Justice William Rehnquist, Colloton also served in the Department of Justice’s Office of Legal Counsel and as a U.S. attorney and associate independent counsel before being confirmed as an 8th Circuit judge in 2003. Friends and colleagues describe Colloton as an active questioner during oral arguments, who is exceedingly well prepared and is “almost a virtual walking encyclopedia of the law, especially Supreme Court law.”

Before being confirmed to the 8th Circuit in 2004, Gruender, who has a compelling personal story, had a distinguished career in private practice and as a federal prosecutor. Since becoming a judge, Gruender has shown himself to be a solid legal craftsman, employing a thorough knowledge of the law, clearly-reasoned and straightforward analyses, and a sophisticated handling of case law.

A former clerk for Justice Anthony Kennedy, Kavanaugh worked as a senior associate counsel and assistant to President George W. Bush and as an associate independent counsel. He was nominated to the D.C. Circuit in 2003 but not confirmed until 2006. Former Attorney General William Barr stated that Kavanaugh “quickly established himself as one of the key outside lawyers I went to on some of my toughest legal issues. He has a keen intellect, exceptional analytical skills, and sound judgment. His writing is fluid and precise. I found that he was able to see all sides of an issue and appreciate the strengths and weakness of competing approaches. He was particularly effective in dealing with novel issues which required some original thinking.” Since joining the bench, Kavanaugh has distinguished himself as a thoughtful, apolitical jurist, who is not afraid to stake out bold positions on complex issues.

Make no mistake about it: Although he is known as the “Tweeting Judge” and the “Tweeter Laureate of Texas” for his humorous and extensive use of social media, Willett is a serious jurist. Before Gov. Rick Perry appointed him to the bench in 2005, Willett served in the U.S. Department of Justice’s Office of Legal Policy, the White House Office of Faith-Based and Community Initiatives, and as counsel to Texas Attorney General (now governor) Greg Abbott. His scholarly opinions reflect that he is a strong proponent of individual liberty—from religious freedom to property rights, to the ability to earn a living free from unreasonable government restraints. In a 2015 interview, Willett stated: “Our Constitution exists to secure individual freedom, the essential condition of human flourishing. … Liberty is not provided by government; liberty preexists government. It’s our natural birthright, not a gift from the sovereign. Our founders upended things and divided power to enshrine a promise, not a process.”

Additionally, although they have never been judges and, therefore, do not have an extensive record of opinions to study, there are two others I would add to the list.

A former Scalia clerk, Clement has argued over 80 cases before the Supreme Court, more than any lawyer in or out of the government since 2000, including many of the most important, high-profile cases before the court during that time period. Clement is well respected on both sides of the political aisle. He has been described as “a walking superlative” and a “wunderkind” by Supreme Court reporter Nina Totenberg, and “the pre-eminent advocate in his generation” by former acting solicitor general Neal Katyal. After Clement resigned from his old law firm over a controversy involving his representation of the Bipartisan Legal Advisory Group of the U.S. House of Representatives in the Defense of Marriage Act case, Justice Elena Kagan praised Clement’s “integrity, professionalism, and honor.”

A former clerk to Justice Samuel Alito, Lee served as a federal prosecutor and as general counsel for former Utah Gov. Jon Huntsman. A deep devotion to the Constitution runs in the family: His father, Rex Lee, was the 37th solicitor general of the United States, and his brother, Thomas Lee, is a justice on the Utah Supreme Court. As a senator, Mike Lee pledged never to vote for “a single piece of legislation that I can’t reconcile with the text and original understanding of the U.S. Constitution,” and his speeches and writings, including his recent book “Our Lost Constitution,” reflect a keen desire to restore important constitutional principles, which he acknowledges is a daunting endeavor.

On the occasion of nominating Chief Justice William Rehnquist and Justice Scalia, Reagan also reminded us that Supreme Court justices “must not only be jurists of the highest competence; they must also be attentive to the rights specifically guaranteed in our Constitution and to the proper role of the courts in our democratic system.” Based on their records, these individuals appear to fit that model.