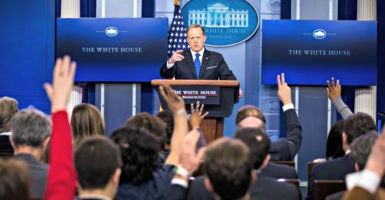 A story in The Washington Post questioning the legitimacy of The Daily Signal and its White House correspondent demonstrates the entrenched news media’s slowness to adapt and protectiveness of its turf, a veteran Washington reporter observes.

“I was surprised that anyone objected to @FredLucasWH’s inclusion in the WH pool,” @BuzzFeedBen says.

Those “gatekeepers” in the White House press corps should focus on proven professionalism and independence from politicians, the top editor of the upstart media company BuzzFeed agrees.

Or as The New York Times’ most experienced White House correspondent tells The Daily Signal: “What constitutes media and who is entitled to judge, anyway?”

John Gizzi, who has covered politics in the nation’s capital since the Carter administration, said he has seen time and time again how resistant to change those who report on change can be.

“It made my blood boil,” Gizzi said of the story by Post media reporter Paul Farhi that questioned allowing The Daily Signal’s Fred Lucas to carry out the responsibilities of a White House “pool” reporter who supplies facts to other reporters.

“Why they singled out The Daily Signal and Fred, I have no idea,” Gizzi, chief political correspondent for Newsmax Media Inc., said in a telephone interview. “But the idea of launching a jihad against an electronic news source who happens to have other backing behind them besides the traditional advertising, it tells me that someone can’t accept change.”

One of those new media outlets, BuzzFeed, pointed to the same “gatekeepers” in coming to the defense of Lucas and The Daily Signal.

“I was surprised that anyone objected to Fred’s inclusion in the pool,” Ben Smith, editor-in-chief of BuzzFeed, said of The Post’s story in a statement provided to The Daily Signal. Smith, who previously covered presidential politics for Politico, added:

There is an increasing range of media models, including nonprofits, and I’d prefer the pool made its judgment on reporters’ professionalism and independence from the people we’re covering, rather than the instincts of its traditional gatekeepers.

BuzzFeed, founded in 2006 and one of the most trafficked websites, also is part of the White House pool rotation.

Before joining The Daily Signal in 2016, Lucas was White House correspondent for The Blaze, another upstart multimedia news organization. But his résumé also includes reporting for traditional newspapers.

“Don’t take it out on Fred, who is a first-rate reporter,” Gizzi said in the interview Tuesday. “I’ve been around the block a few times on Pennsylvania Avenue. Fred is more of a newer face, and more emblematic of the electronic journalism.”

That mentality [suspicion of new competition] has grown exponentially, and because a foundation happens to underwrite The Daily Signal, that’s difficult to explain. … Well, get ready. In a few years, they’ll be a lot more Daily Signals out there, a lot more CNSes.

To a reporter who asks for 2 questions & gets 3 in, @PressSec says "you count like CBO."

The Daily Signal, which launched in June 2014, is the multimedia news organization of The Heritage Foundation, the leading conservative think tank established in 1973. Heritage’s hundreds of thousands of donors, rather than advertisers, finance the operations of The Daily Signal, which also publishes commentary.

Before joining Newsmax four years ago, Gizzi was a mainstay for three decades at Human Events, the venerable conservative journal where he was political editor and White House correspondent.

Gizzi said reporters for outlets such as The Washington Post, The New York Times, and the Big Three television networks continue to view their own news coverage as “impartial” or “nonpartisan,” as The Post’s March 10 story on Lucas reflects, just as their reporters did when challenged in the past by then-newcomers such as The Washington Times, USA Today, and Fox News.

“It’s like being in the medical profession. Get a second opinion,” Gizzi quipped of charges of partisanship or partiality lobbed at conservative journalists by the legacy media. “I’ve heard it in different versions in all my 37 years, almost 38 years, as a reporter in Wa­shington.”

Now the new competitors range from BuzzFeed to The Daily Signal.

David Boyer, White House correspondent for The Washington Times, said he was happy to comment on Lucas.

“Fred Lucas is a diligent, persistent, hardworking journalist with a thorough understanding of the issues in Washington,” Boyer told The Daily Signal in an email Monday. “He is also a gentleman. His initial pool reports [for The Daily Signal] have been straightforward and impartial, exactly what I would expect from him.”

More and more nontraditional news outlets have been credentialed by the White House over the past decade, including many liberal-leaning organizations.

Some, including Huffington Post and Talking Points Memo, also are assigned by the independent White House Correspondents’ Association to help provide pool reports for other media outlets when the president, vice president, or first lady are on the move around Washington.

Jeff Mason, White House correspondent for Reuters and president of the White House Correspondents’ Association, told The Post that the organization intended to review criteria for selecting reporters who supplement its regular pool.

“What about news organizations that profess neutral objectivity but are criticized for not always living up to that, mine own included?” @peterbakernyt

No one has complained to Rob Bluey, editor-in-chief of The Daily Signal, about the factualness of Lucas’ pool reports—a point Bluey made in a commentary on the apparent double standard.

The Post’s story did not report concerns with participation by news organizations with a liberal perspective, such as the Washington Blade, a vocal champion for lesbian, gay, bisexual, and transgender Americans. The Blade’s White House reporter, Chris Johnson, did pool duty for Pence’s March 17 meeting with the Republican Study Committee.

“There’s a real question these days about what constitutes media and who is entitled to judge, anyway,” Peter Baker, one of seven reporters assigned by The New York Times to cover President Donald Trump, said. “It’s not a closed club anymore the way it was in the old days—the wires, the networks, and the big papers.”

Baker, in an email Wednesday to The Daily Signal, noted that as far as what organizations are part of the White House in-town press pool, the horse bolted the barn in 2009, something he warned about at the beginning of the Obama administration. He said:

The lines are blurry, and in effect the White House press corps made a decision several years ago to opt for more inclusiveness by inviting into the pool organizations that are more overtly partisan, ideological, or opinion-based. Some of us were concerned at the time about the precedent that was being set and whether enough thought had gone into the longer-term consequences.

Having made that decision several years ago, it becomes harder to draw lines now and say this organization is acceptable and this one is not. But does the line become too blurred if we don’t distinguish between organizations with an independent news mission and organizations with an advocacy mission? Should the ownership of organizations be considered? What about news organizations that profess neutral objectivity but are criticized for not always living up to that, mine own included? Is there a way to define standards that are reasonable and can be applied across the board?

These are tough questions, and I imagine the White House Correspondents’ Association will continue to grapple with them.

That's a standard clause in all my contracts.

Baker, who is covering his fourth president after returning to the White House beat from an overseas assignment, said he has met Lucas but doesn’t know him well.

Gizzi described Lucas as an aggressive “shoe-leather” reporter who is comfortable with modern tools and knows how to deliver a just-the-facts pool report.

“@FredLucasWH is on the job and he’s always got his arms around a story,” @johngizzi says.

“I am incensed that my friend Fred is under fire,” he said. “Fred Lucas is tenacious, he’s fair, and whether it’s covering the National Governors Association or the presidential primaries or the White House, he is on the job and he’s always got his arms around a story.”

Baker, previously a White House correspondent for The Washington Post, said that without judging Lucas or The Daily Signal, he would make a distinction between who gets access to the White House briefing room and who is chosen for the reporting pool to cover Trump, Pence, and the first lady.

“Because the pool is an institution upon which all of us rely for full, complete, timely, and accurate information,” Baker said, “the standard [for participating] should be higher than simply saying anyone can come to the briefing room and put his or her hand up to ask a question.”

In fairness, there’s a lot more interest in the press room under Sean Spicer than there was under Josh Earnest. He’s got 4.6 million viewers and growing, he’s a character on ‘Saturday Night Live.’ There’s greater interest in [the daily briefing], and a show like this is getting ratings like it’s a daily drama. … I’d say, with all due respect to my good friend Josh Earnest, there never was the interest to look at all these other people in the room in the past two years. It’s ‘Beat the Press,’ and ratings are growing.

“Look, The Daily Signal is here to stay, and a lot of these others.”

Jarrett Stepman contributed to this report.