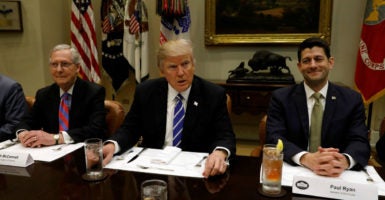 The Senate action followed a 382-30 House vote to pass the one-week extension. Without the measure, the government would have run out of money as Friday turned to Saturday.

Update: Congressional negotiators agreed late Sunday on a broad spending plan to fund the government through September, The Washington Post reported, citing several aides who also said Democrats got their way with Republicans in key policy areas. Congress is expected to vote within days on the roughly $1 trillion package, which the newspaper said includes $12.5 billion in new military spending and $1.5 billion more for border security, but not to begin constructing a wall.

The makeshift spending agreement allowed lawmakers in the House and Senate another week to negotiate and pass a huge, omnibus spending bill to fund the government through the rest of fiscal year 2017, which ends Sept. 30.

“It really bothers me that we’re so late in getting this thing done,” Rep. Andy Biggs, R-Ariz., said of the 11th-hour spending resolution in an interview Friday with The Daily Signal.

Rep. Andy Harris, R-Md., a member of the House Appropriations Committee, told The Daily Signal before the weekend that the omnibus bill, expected to be introduced Monday, was progressing well.

“My understanding is that the omnibus bill is nearly complete, that … we may actually be able to combine all the separate appropriations bills into that omnibus bill, and that’s good news,” Harris said in an interview.

Votes on the omnibus bill were expected Thursday.

Funding for Trump’s promised border wall is not included. Republican lawmakers in the House and Senate have said they prefer to put off a fight with Democrats over beginning to pay for the wall until the fall, rather than as part of funding the government for the rest of the current fiscal year.

“Full border wall funding can’t be there at this point,” Sen. James Lankford, R-Okla., a supporter of the wall, said in a recent interview with The Daily Signal. “It’s not designed, prototypes have not been created.”

Authorization of the new border-security money requires that the Trump administration use it only for technology  and repairs to existing fencing and infrastructure, The Post reported.

Update: According to The Post’s report Sunday night, the legislation as drafted would ensure that Planned Parenthood continues to receive federal funding through September. The newspaper reported that Senate Minority Leader Charles Schumer, D-N.Y., and House Minority Leader Nancy Pelosi, D-Calif., “boasted that they were able to force Republicans to withdraw more than 160 unrelated policy measures, known as riders, including those that would have cut environmental funding and scaled back financial regulations for Wall Street.”

The Post quoted Schumer as saying: “The bill ensures taxpayer dollars aren’t used to fund an ineffective border wall, excludes poison pill riders and increases investments in programs that the middle class relies on, like medical research, education and infrastructure.”

National defense must be a priority in the omnibus bill, Harris told The Daily Signal on Friday.

“I look forward to a very lively discussion for the next year’s appropriations bills on the president’s plan to begin to prioritize funding within the nonmandatory side of the ledger and to re-emphasize defense of the nation and homeland security as a top priority,” Harris said.

Pelosi earlier had predicted a battle between Democrats and Republicans over the omnibus bill.

“There are probably still 70 poison pills in the bill that we can’t live with,” Pelosi said Wednesday on CNN.

“One party now controls the White House and both chambers of Congress,” Sen. Patrick Leahy, D-Vt., ranking  member of the Appropriations Committee, said in a prepared statement about the one-week extension. “It is incumbent upon them to ensure that the government of the American people stays open and is fully funded.”

Biggs sounded cautiously optimistic about what those crafting the omnibus would present to fellow lawmakers.

“I hope they produce something in writing soon because I don’t know how they expect people to vote on stuff they don’t have time to read,” the Arizona Republican said.

Ken McIntyre contributed to this report, which has been updated to reflect the apparent agreement on a spending package reached Sunday night, as well as the president’s signing of the stopgap spending bill.