What Trump Has Done on Immigration in First 100 Days 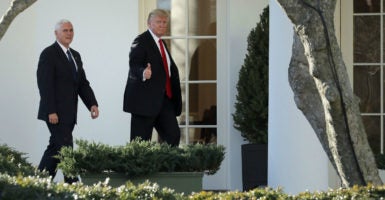 President Donald Trump’s dedication to enforcing immigration law is one of his significant accomplishments as he nears his 100th day in office Saturday, experts and lawmakers say.

Trump is “taking the handcuffs off of [Immigration and Customs Enforcement] and the Border Patrol because the immigration enforcement officers were prohibited from doing their job to a significant degree under [President Barack] Obama,” Mark Krikorian, executive director of the Center for Immigration Studies, told The Daily Signal in an interview.

The Trump administration highlighted its dedication to enforcing immigration law in a list, initially obtained by CNN, which specifies victories during the president’s first 100 days in office.

Included are executive orders issued by Trump on Jan. 25 that detail border security and immigration enforcement directives. These include instructions for a border wall, an order to withhold funding from sanctuary cities that are noncompliant with U.S. immigration law, and the hiring of “10,000 additional immigration officers.”

Trump also signed a revised executive order in March which placed temporary travel restrictions on residents of six countries the Obama administration and Congress had designated as posing risks of terrorism.

Rep. Louie Gohmert, R-Texas, who is vice chairman of the House Judiciary Committee’s subcommittee on crime, terrorism, and homeland security, said he agrees with these measures.

“Just having a president who says, ‘We’re going to enforce the border’ has had a profound effect on the number of people that are coming into the country illegally,” Gohmert told The Daily Signal in an interview. “It [has] already dramatically been cut back and so I think this is moving along quite well.”

Hans von Spakovsky, a senior legal fellow at The Heritage Foundation, told The Daily Signal in an interview that there is a stark difference between the Obama administration and the Trump administration.

“What has changed so radically is that the Department of Homeland Security and all our border patrol agents are now finally able to do their jobs,” von Spakovsky said. “The handcuffs have been taken off.”

The number of illegal immigrants crossing the U.S.-Mexico border in March, under 12,500, is the lowest total in 17 years, he said.

Trump’s approach to illegal immigration is vastly different from Obama’s, said Krikorian, of the Center for Immigration Studies, which advocates stricter enforcement of immigration laws.

This practice, reinstated in 2016, came from Obama’s “priorities” program, which instructed agents to pick up criminals, individuals threatening national security, and illegal immigrants who entered the U.S. after Jan. 1, 2014.

When Obama was in office, Krikorian said, Border Patrol agents would see individuals who were “still wet from wading across the Rio Grande.”

However, if the Border Patrol agents “hadn’t actually seen them with their own eyes in the river, they had to let them go” if they claimed to have arrived before 2014, he said.

Working Toward Building the Wall

“One thing that the Trump administration has done very well is broadcast loud and clear that they are going to keep their promise of [building] the border wall,” Biggs, who comes from a border state, told The Daily Signal in an interview. “And that has resulted in a reduction in crossings.”

Last month, Trump sent a letter to House Speaker Paul Ryan, R-Wis., which detailed border wall funding with a request for $1.38 trillion for U.S. Customs and Border Protection to be available through September 2021. It would cover “procurement, construction, and improvements required for the operational control of United States borders, including design and construction of a wall and other physical barriers on the southern border of the United States.”

Republican lawmakers in the House and Senate, however, have said they prefer to put off a fight with Democrats over beginning to pay for the wall until the fall, rather than as part of funding the government for the rest of the current fiscal year, which ends Sept. 30.

“Full border wall funding can’t be there at this point,” Sen. James Lankford, R-Okla., a supporter of the wall, said in a recent interview with The Daily Signal. “It’s not designed, prototypes have not been created.”

Trump said Tuesday that funding for the wall likely will not be included in the spending bill that Congress must pass by midnight Friday to avoid a partial government shutdown, The New York Times reported.

Don't let the fake media tell you that I have changed my position on the WALL. It will get built and help stop drugs, human trafficking etc.

Michelle Mittelstadt, director of communications at the Migration Policy Institute, a nonpartisan think tank on immigration, told The Daily Signal in an email that “the net result of his first 100 days is that a combination of action and rhetoric appear to be significantly reshaping the current immigration reality in the U.S.”

Taking a Stand Against Sanctuary Cities

“I’ve been particularly encouraged by the administration’s support for denying federal funds to sanctuary cities, in line with legislation I’ve backed,” Sen. Roy Blunt, R-Mo., said in a statement provided to The Daily Signal.

During the Obama presidency, Blunt called on Senate colleagues to “limit federal funding” to sanctuary cities that did not cooperate with enforcing federal immigration laws.

“The previous administration set a dangerous precedent by cherry-picking the laws it chose to enforce, and I’m glad we now have a partner in the White House who is holding sanctuary cities accountable,” Blunt said.

Trump’s order is facing opposition in the courts, however.

On Tuesday, a federal judge in San Francisco placed a national hold on Trump’s executive order regarding sanctuary cities until the issue can work its way through the courts.

Federal funding for entitlement programs such as Medicaid in sanctuary cities, however, would not be affected by the president’s order, von Spakovsky said in a new commentary.

The Department of Justice says it is working to implement Trump’s executive order to urge sanctuary cities to provide documentation of compliance with the department. The department also is hiring more immigration judges who will serve at detention centers along the border, Sessions announced this month.

An area of immigration policy that Trump could improve on, Krikorian of the Center for Immigration Studies said, is addressing a program implemented by the Obama administration in 2012 called Deferred Action for Childhood Arrivals, or DACA.

This program has provided deportation protection and work permits to over 750,000 immigrants who were brought to the U.S. illegally as children.

“The fact that [Trump] has basically adopted the DACA, the illegal DACA amnesty, as his own is the one big black mark with regard to immigration,” Krikorian said. “Does it cancel everything else out? No, but it clearly is a problem.”

Kerwin specifically criticized what he called Trump’s commitment “to decreasing refugee admissions by more than 15 percent at a time when you know there’s a global refugee crisis that exceeds in size the crisis after World War II.”

“The language, the rhetoric has been brutal,” Kerwin told The Daily Signal in an interview, adding:

It’s been unwelcoming. The proposals have been extraordinarily extremist and harsh, and they show no concern at all, no recognition at all for the benefits that immigrants contribute to the United States.

Going forward, Biggs said, Trump should remain focused on the border wall and the need to secure funding for it.

“President Trump is putting the safety of the American people first by taking action to enforce our immigration laws, strengthen border security, and prevent terrorists from entering the country,” he said.