What’s at Stake in the Coming 4-Day Spending Fight 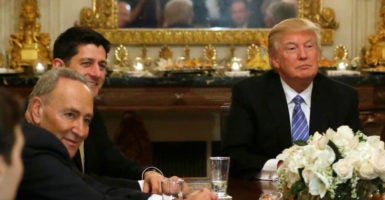 When Congress returns from its Easter recess April 24, lawmakers will have only four legislative days left to decide on a spending plan that prevents a government shutdown.

With such a narrow window, the House and Senate will have little choice but to pass a huge, omnibus spending bill and again put off a return to the regular budget process for a later day.

This prospect rankles conservatives such as Sen. James Lankford, R-Okla.

“We’ve got to be able to maintain our budget,” Lankford, who sits on the Senate Appropriations Committee, told The Daily Signal. “Just saying, ‘Whatever we did last year, let’s do that again’ is extremely inefficient, and that’s the situation where we spend the same amount of money and have less efficiency.”

But, Lankford added in a phone interview, “we still have the status quo that we’re dealing with until we can make a change.”

Justin Bogie, a senior fiscal affairs policy analyst at The Heritage Foundation, said he expects Congress to pass an omnibus spending bill to keep the government running through fiscal year 2017, which ends Sept. 30.

“It’s hard to speculate on anything Congress will do, but if I were to guess, I think the most likely outcome is that we see an omnibus spending bill … that gets us through the rest of the fiscal year,” Bogie told The Daily Signal in an email.

Bogie said the funding package likely will be an omnibus, or catchall, bill set around the $1.1 trillion spending level established in 2015. He said lawmakers probably won’t pass another temporary measure, called a continuing resolution, that funds programs at current levels for a set period of weeks or months.

An omnibus spending bill throws funding for the entire government into one bill, rather than the traditional 12 separate bills for various program categories, and critics such as Lankford say this approach leads to more inefficient and wasteful spending.

The Bipartisan Budget Act of 2015, also known as the Boehner-Obama budget deal, suspended the debt limit and raised caps on discretionary spending by a total of $80 billion over fiscal years 2016 and 2017, allowing the government to spend more money. The caps return to prior levels for fiscal year 2018.

There will still be a desire from many Republicans to increase defense spending, so I think it is likely that they will try to move a separate defense supplemental appropriations bill later this spring or summer. That could potentially become a battle if Democrats insist on increases to domestic programs as well.

Bogie said it is unlikely the spending package will include contested policy riders, such as measures to defund Planned Parenthood or pay for the president’s promised border wall, because “it doesn’t sound like either side wants to risk a shutdown.”

A policy rider attached to a spending bill either creates an entirely new policy or dictates how the government must spend existing funds. Democrats have said they would oppose riders on issues such as abortion and the wall.

Last month, Senate Minority Leader Chuck Schumer, D-N.Y., threatened that Democrats would rather shut down the government than allow funding for Trump’s border wall, although he voted 11 years ago to build fencing along the border.

Lankford said full funding for the border wall probably will not be included because the Trump administration has not given Congress specific details for the project, or how it will be paid for.

“Full border wall funding can’t be there at this point,” said Lankford, a supporter of the wall, adding:

It’s not designed, prototypes have not been created. You can’t have full funding if you don’t even know the locations, what the design will be, how it will be maintained, how we’re going to acquire land, how we’re going to have access, the roads, none of those things have been decided yet.

Trump last month sent a letter to House Speaker Paul Ryan, R-Wis., detailing a request for $1.38 trillion for U.S. Customs and Border Protection to be available through September 2021 to cover “procurement, construction, and improvements required for the operational control of United States borders, including design and construction of a wall and other physical barriers on the southern border.”

Because Republican lawmakers have yet to come to a consensus on repealing and replacing Obamacare after House leaders failed to attract enough votes to pass their American Health Care Act, Lankford said, this spending package also will cover Obamacare costs.

The Congressional Budget Office, a nonpartisan agency of Congress, reported in 2015 that Obamacare provisions related to health insurance would cost federal taxpayers $571 billion through 2019.

It is possible, Bogie said, that Congress could pass another continuing resolution to fund the government for a matter of days while lawmakers negotiate details of the omnibus bill.

“If no agreement could be reached,” the Heritage analyst said, “they could pass another [continuing resolution] through the end of the year. I doubt they end up going in that direction, but it is an option.”

What’s pretty clear, Lankford said, is that lawmakers won’t let funding run out and bring on a government shutdown.

“I don’t hear people talking about a government shutdown,” Lankford said. “But we do have to be able to resolve both the funding issues and also deal with health care, and [we] have to deal with tax policies.”

.@USCBO put out its #budget outlook last week. I hate to spoil the fun for you, but things are not looking good. https://t.co/jMlqxQ20qU

“I would advise President Trump: ‘Don’t worry about them sticking that label on you. Congress owns the government shutdown brand,'” McConnell said. “There’s no incentive, frankly, for either side to go to the brink.”

Lankford said he would prefer funding the government through the regular process, including 12 separate appropriations for areas such as defense, homeland security, parks, and transportation.

“The continuing resolution ends up being the same amount of money [and] … is spent less efficiently than you do with appropriations,” the Oklahoma Republican said. “In the appropriations process, you can actually turn programs off, you can be more specific in what will be funded, changes from last year that need to be done.”

It is imprudent, Lankford said, to continue to fund the government with last-minute spending measures.

As the national debt nears $20 trillion, Lankford said, lawmakers must reduce spending and spend more efficiently, rather than keep allocating money for programs that might not be worthy or working.

“Well, what I hope to happen is that we actually reduce spending,” Lankford said, adding:

That’s the key. We’ve got to get back to a spot where we’re actually more efficient and we’re not just taking money away from one program so that we can spend it on another one, but we actually reduce spending so we can deal with our debt and deficit issues that desperately need to be addressed.