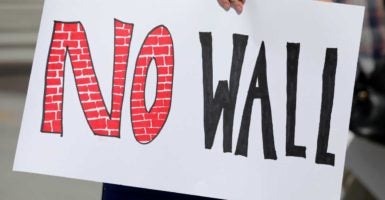 A protester holds a sign objecting to a border wall during a visit by Attorney General Jeff Sessions and Homeland Security Secretary John Kelly near the U.S.-Mexican border. Congress doesn't plan to include money for a wall in funding the rest of the current fiscal year. (Photo: Mike Blake/Reuters/Newscom)

Congress plans to pass a final spending bill to keep the government running beyond the next week, but without funding for a border wall. The White House, however, says it will demand money for President Donald Trump’s signature campaign issue in next year’s budget plan.

“The president is committed to having a physical border wall. That is not to be doubted,” Helen Aguirre Ferré, White House media affairs director, told The Daily Signal in an interview Friday, adding:

The funding didn’t have to be at this particular point in time, when we need a continuing resolution when it comes to the budget, but it’s definitely going to be presented by September, when we have to have the budget going forward. I don’t think anybody should doubt that this is something that is going to be pressed on.

The current fiscal year runs through Sept. 30. Congress has not added any funds for that budget year specifically for a wall along the Mexico-U.S. border.

Trump’s proposal for fiscal year 2018, which begins Oct. 1, includes a $1.5 billion down payment on the wall. Office of Management and Budget Director Mick Mulvaney said in March that another $2.8 billion likely would go into funding the wall the next fiscal year.

Senate Minority Leader Charles Schumer, D-N.Y., had threatened a government shutdown if any funding in the spending bill for the current fiscal year goes toward construction of a border wall.

The House passed the measure by a vote of 382-30, while the Senate followed with a voice vote. Trump signed the stopgap spending measure later Friday, the White House announced.

>>> Congress Gives Itself Another Week to Craft Spending Bill

The White House previously had dropped Trump’s demand that some funds for the wall be included in the final spending bill.

“Our biggest concern at this point in time is to do the No. 1 thing that the American public has put on our shoulders—and we signed up for the job, quite frankly—which is to govern. And that means that the government must remain open,” Ferré said.

When asked if the president was willing to risk a government shutdown with Schumer when talks resume in September, Ferré said:

We hope that everybody comes together to the table to really work to resolve our nation’s problems. That includes border security. The president is committed to the border wall. There will be funding for the border wall.

This report has been updated to reflect the president’s signing of the stopgap spending bill.