I’m Indian American. What I Think When Republicans Are Accused of Racism. 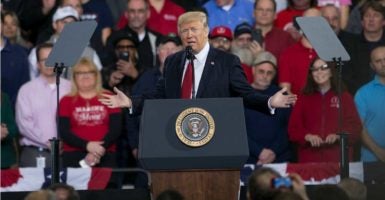 President Donald Trump speaks at the American Center for Mobility in Ypsilanti, Michigan, on Wednesday about manufacturing and jobs one day before his administration's budget plan is set to be released. (Photo: Rena Laverty/EPA /Newscom)

The first payment for President Donald Trump’s long-promised border wall will be $1.5 billion, said Mick Mulvaney, the director of the Office of Management and Budget.

“This is an America first budget,” Mick Mulvaney says.

Mulvaney spoke to reporters Wednesday about the Trump administration’s next proposed budget that would slash more than a quarter of total funding from the State Department, primarily in foreign aid, and provide a 10 percent budget hike for the Pentagon.

The Trump budget proposal also increases funding for the Department of Homeland Security by 6 percent, Mulvaney told reporters, in a briefing that was embargoed until after midnight.

“This is an America-first budget,” Mulvaney said.

He noted the president’s campaign promises and added, “We turned those words into numbers.”

“We proposed ending funding,” he said. “It’s an elimination, but you’ll see an amount in the budget, some amount of money that is necessary for us to unwind our involvement with the [Corporation for Public Broadcasting.]”

The budget blueprint—set for release at 7 a.m. EST Thursday—deals only with discretionary spending. So, while Mulvaney says the spending plan doesn’t add to the federal deficit, the White House doesn’t have a projection as to when or if the budget could be balanced over the next decade.

The U.S. government is projected to spend $4 trillion next year—two-thirds mandatory spending going to Social Security, Medicare, Medicaid, and interest on the national debt. This spending will reportedly stay in place.

Mulvaney further explained individual departments and agencies would determine the budget line items in a proposal to be released in May.

Among other things, that May document will explain how much the government will spend over the next decade. Regarding the wall, Mulvaney said:

The next question will be how many miles of wall will that build. We don’t know the answer to that question because we haven’t settled on construction types. We haven’t settled on where we are going to start. I think the funding provides for a couple of different pilot cases, different kinds of barriers as we try to find the most cost-effective, the safest, and also the most effective border protections. They may be different in different areas. So, the $1.5 billion allows us to start that program. We come along with additional funding, $2.6 billion in 2018. Obviously, as we get to that full budget in May, you’ll also start seeing some projections for the 10-year window.

The $54 billion increase boosts the military budget to $603 billion, and it will be paid for through cuts to foreign aid.

“There is no question, this is a hard power budget. It is not a soft power budget,” Mulvaney said. “That was done intentionally. The president very clearly wants to send a message to our allies and our potential adversaries that this is a strong, powerful administration. So, you are seeing money move from soft power programs, such as foreign aid, into hard power programs. That’s what our allies can expect. That’s what our adversaries can expect.”