Istanbul Terrorist Attack Is Another Strike in ISIS Ramadan Offensive 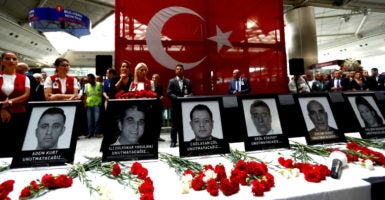 Airport employees attend a ceremony for those who were killed in the terror attack at Ataturk airport in Istanbul, Turkey. (Photo: Murad Sezer/Reuters/Newscom)

As the death toll mounts from the June 28 terrorist attack on Istanbul’s Ataturk airport, it appears that the attack bears the fingerprints of the Islamic State, also known as ISIS or ISIL.

Turkish officials on Thursday charged that foreign fighters from Russia, Uzbekistan, and Kyrgyzstan executed the attacks after infiltrating Turkey from Raqqa, the ISIS headquarters in Syria.

The attackers sought to maximize casualties by using armed suicide bombers to assault a soft civilian target in a multipronged, militarized commando-style operation, as in the Nov. 13, 2015, ISIS attacks in Paris that killed 130 people.

Turkey has been repeatedly targeted by the Islamic State, in part due to its growing role within the anti-ISIS coalition. Turkish officials blame ISIS for at least four suicide bombings in the last year, including two in Istanbul.

ISIS and its predecessor, Al-Qaeda in Iraq, also refrained from claiming responsibility for many of their terrorist attacks in Iraq, in an effort to fuel suspicions and provoke Sunni-Shia sectarian tensions to undermine the Baghdad government.

Turkey is a frontline state in the battle with ISIS, which has carved out a proto-state in neighboring Syria and Iraq. Turkey’s armed forces have reportedly stepped up strikes against ISIS in Syria in recent months, after turning a blind eye to ISIS activities in Syria for several years.

Ankara prioritized the ouster of Syrian dictator Bashar al-Assad by working with Muslim Brotherhood networks in Syria and saw ISIS as a greater threat to the Assad regime than to Turkey. It also perceived ISIS to be a lesser threat to Turkey than the Kurdistan Workers’ Party, a leftist Kurdish separatist organization it is battling, primarily in eastern Turkey.

Turkey represents much of what the Islamic State hates: a modern Muslim secular democracy that rejects the harsh brand of Sharia (Islamic law) that the terrorist group insists represents the true face of Islam.

The Islamic State sees itself as the catalytic vanguard of a global revolution that will create an Islamist utopia by going “back to the future” to restore the caliphate (the Islamic empire established by the Prophet Muhammad) as it supposedly existed in the earliest days of Islam.

Therefore it is not surprising that an airport named after Ataturk, the secular Turkish leader who abolished the caliphate in 1924, has been targeted for terrorism.

The attack also is consistent with past ISIS attacks on aviation targets such as Brussels airport on March 22 and the bombing of a Russian airliner on October 31, 2015, over Egypt’s Sinai province.

The Istanbul terrorist atrocity also undoubtedly was intended to target foreign tourists and undermine the Turkish economy. An estimated 8 percent of jobs in Turkey are tied to tourism.

ISIS and other Islamist extremist groups have targeted tourists in Egypt, Jordan, and Tunisia, among other countries, in order to weaken governments they seek to overthrow and reduce the Western presence in Muslim countries, which they deem to be a corrupting influence on Muslims.

ISIS has flourished in the chaos of Syria’s civil war, much as its predecessor al-Qaeda flourished in Afghanistan’s civil war. Both Islamist revolutionary movements sought to hijack rebellions against local secular regimes and transform them into movements supportive of a global Islamist insurgency.

But ISIS has had much greater success than al-Qaeda in attracting young Muslims, particularly in Western countries, through the aggressive use of a wide spectrum of social media platforms. The ISIS June 2014 claim to have recreated the “caliphate” has amplified its ideological attraction, allowing it to recruit over 25,000 foreign fighters, some of whom could launch terrorist attacks outside of Iraq and Syria, as they did in Istanbul, Paris, and Brussels.

ISIS also has been successful in inspiring terrorist attacks by “stray dogs” (or “lone wolves”) who have no formal ties to the group. This seems to have been the case with the Islamist extremists who launched terrorist attacks in Orlando, Florida, on June 12 and San Bernardino, California, on Dec. 2, 2015.

Unfortunately, the United States is likely to see many more of these types of attacks. ISIS spokesman Abu Mohammed al-Adnani called for further attacks against Western countries on May 21, in proclaiming that ISIS would launch an offensive during the month of Ramadan (June 5 to July 5, according to the Muslim lunar calendar). Adnani stated that:

The smallest bit of work that you can carry out in their countries is far better and beloved to us than any major work [i.e. operations] here. [These operations] would be of much success and more harmful to them. Though anyone of you may wish and diligently seek to come to the Islamic State, any one of us would love to be in your place to inflict harm on the crusaders day and night without [needing] to sleep and terrorize them until neighbors are terrified of each other.

The Istanbul attack is part of the ISIS Ramadan terror campaign, as were recent attacks in Jordan, Lebanon, and Yemen.

ISIS recently released a video in which it praised the Orlando shooter and threatened attacks on San Francisco and Las Vegas, symbols of what it sees as a decadent civilization. This is likely an effort to incite more “stray dog” attacks.

The ISIS Ramadan campaign seeks to exploit the Muslim belief that good deeds are rewarded doubly by Allah during the holy month of Ramadan, by redefining terrorist attacks as religious obligations.

The rewards of good deeds on the 27th day of Ramadan, the “Night of Power,” which Muslims believe commemorates the time that Muhammad first received the verses of the Koran, are especially amplified.

That sacred day, which falls on July 2 this year, could become a target date for ISIS sympathizers who have swallowed its propaganda about terrorist actions yielding religious benefits.

For more information on this topic:
The Growing Threat of ISIS Unleashing a Weapon of Mass Destruction
Obama Refuses to Alter ISIS Strategy
Combatting the ISIS Foreign Fighter Pipeline: A Global Approach
Paris Terrorist Attacks Underscore the Expanding Threat Posed by ISIS
What’s Next for Libya, Now an ISIS Stronghold?