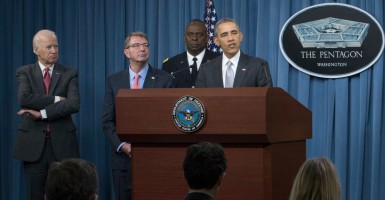 President Barack Obama traveled to the Pentagon on Monday in a highly choreographed public relations exercise designed to reassure Americans about his administration’s efforts to defeat the Islamic State (also known as ISIS or ISIL) and protect against terrorist attacks at home and abroad.

Speaking for eight minutes, surrounded by a phalanx of Pentagon officials and Vice President Joe Biden, the president had little new to say. He proclaimed once again that his minimalist strategy against ISIS is working and that “[w]e are hitting ISIL harder than ever.”

The inconvenient truth is that the Obama administration has been pulling its punches since its military campaign against ISIS began on August 7, 2014, more than 16 months ago.

White House micro-managers have put such heavy political restrictions on air strikes to limit possible civilian casualties that up to three quarters of U.S. warplanes return to bases without dropping their bombs.

The air campaign is handicapped by the most restrictive rules of engagement of any U.S. air operation in history. As a result, ISIS has been hit by only a “drizzle” of U.S. air strikes.

From the beginning, the Obama administration misunderstood and underestimated the threat posed by al-Qaeda and its ISIS offshoot in Iraq. Obama allowed short-term political interests to trump long-term national security considerations when he abruptly ended the U.S. troop presence in Iraq in Dec. 2011.

This deprived the Iraqi government of intelligence, military training, counterterrorism, surveillance, and reconnaissance assets and allowed ISIS (then called Al-Qaeda in Iraq) to grow in a more permissive environment.

Obama downplayed the threat of ISIS, famously discounting it as a “J.V. team” in a January 2014 interview in the New Yorker.

The White House reacted slowly and reluctantly with a series of half-measures enacted in a piecemeal fashion. It initially committed a few hundred advisers to support Iraqi security forces and retrain the shattered Iraqi army.

The administration also ruled out combat operations by U.S. military forces and restricted the deployment of advisers to rear areas far from the fighting. Gradually it has increased the number of these advisers to 3,500 personnel, but the overall effort to combat ISIS remains under-resourced.

The Obama administration’s lack of a sense of urgency in the face of the ISIS onslaught has been breathtaking. The president even proclaimed the day before the November 13 Paris terrorist attacks that ISIS was contained.

The Obama administration’s lack of a sense of urgency in the face of the ISIS onslaught has been breathtaking.

The administration’s ad hoc incremental approach is no way to win a war. It gives ISIS time to adjust, to dig in, and to attract thousands more foreign fighters—about 1,000 fighters each month.

This is in part why the chairman of the Joint Chiefs of Staff, General Joseph Dunford, and Secretary of Defense Ashton Carter admitted that “we have not contained” ISIS at a December 9 hearing before the Senate Armed Services Committee.

The administration still has not matched ends and means effectively in the struggle against ISIS. After dragging its feet for many months, it announced the deployment of 50 special operations personnel to Syria in November and a larger “expeditionary targeting force” to Iraq on Dec. 1.

In recent months, it has also started bombing ISIS oil facilities and the tanker trucks that transport that oil. Secretary of Defense Carter also indicated last week that the administration is now willing to deploy attack helicopters in Iraq.

These are appropriate steps, but they should have been done long ago.

The administration’s slow-motion approach to addressing the threat of ISIS has been criticized not only by members of both parties in Congress, but also within the Pentagon.

A frustrated Pentagon official told a reporter from the Daily Beast last week, “Our hands are tied. You want us to do more, then go talk to those guys across the river,” a reference to the White House, which has micromanaged the anti-ISIS campaign and done a poor job of it.

Perhaps after the terrorist attacks in Paris and San Bernardino, Calif., the “J.V. team” at the White House can find the motivation to step up its game against ISIS. But the president’s remarks at the Pentagon on Monday give little reason for optimism.

See also: Obama Needs to Step Up the Fight Against ISIS, Obama, It’s Time to Stop Shifting the Blame and Develop an ISIS Strategy