The Growing Threat of ISIS Unleashing a Weapon of Mass Destruction 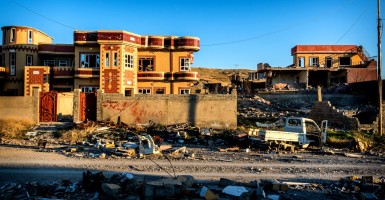 Sinjar, Iraq which was invaded by ISIS in August of 2014. (Photo: Alessandro Rota/Sipa USA/Newscom)

Brooke Branson is a member of the Young Leaders Program at The Heritage Foundation.

The apocalyptic ideology that propels the Islamic State (also known as ISIS) is by now well known. Much less widely known are the use of chemical weapons by ISIS in Iraq and Syria and the disappearance of radioactive materials in Iraq that could be used in a “dirty bomb,” a radiological weapon of mass destruction (WMD).

Reuters reported the disappearance of 10 grams of a “highly dangerous” radioactive isotope used to test oil and gas pipelines in southern Iraq, which Iraqi authorities fear may have fallen into the hands of ISIS. The Iridium-192 material, classified as a Category 2 radioactive source, could permanently injure people exposed to it for only a few hours, or kill people exposed to it longer.

The radioactive isotope was stolen in November from a storage facility in the southern city of al-Zubair, which is more than 300 miles away from ISIS-controlled territory. But ISIS has launched attacks nearby.

The U.S. State Department announced that it has seen no evidence that the missing Iridium-192 has turned up in the hands of ISIS or other terrorist groups. But it is also possible that the material was stolen by a criminal organization that could sell it to a terrorist group.

The New York Times yesterday reported that Belgian police disrupted a suspected plot to obtain radioactive materials from one of Belgium’s four nuclear sites for a possible dirty bomb, which was devised by the same ISIS-linked terrorist network that perpetrated the Paris bombings in November.

ISIS declared its intention to develop WMD last year in its propaganda magazine, Dabiq. While detonating a dirty bomb could have a huge psychological effect, its lethality would likely be limited.

A much more immediate concern is the use of chemical weapons in Iraq and Syria by ISIS.

CIA Director John Brennan told CBS’ “60 Minutes” on Sunday that ISIS has detonated chemical munitions on battlefields in Iraq and Syria and it has the capability to make small quantities of chlorine and mustard gas.

Bin Laden tried to buy uranium for a nuclear device as early as 1993 and al-Qaeda had an ambitious anthrax program that was discovered in December 2001.

In November, U.S. and Iraqi intelligence officials warned that ISIS had established a branch to aggressively develop chemical weapons with the help of scientists from Iraq, Syria, and elsewhere.

These efforts may have been boosted when ISIS seized the Al Muthanna State Establishment, the former center of Saddam Hussein’s chemical warfare program, in June 2014. Although the chemical munitions stored there reportedly were decaying and unfit for military use, the Islamic State may have found a way to safely transport and use them.

The United States discovered more than 4,500 chemical munitions in Iraq after invading in 2003, although all of them appeared to have been manufactured before the 1991 gulf war.

The United States and its allies must work relentlessly to keep WMD out of the hands of terrorist organizations by cracking down on the smuggling of weapons and dual-use technologies; conducting sting operations to remove buyers and sellers from circulation; and helping various governments (particularly those in the former Soviet bloc and Pakistan) to bolster security around nuclear, chemical, and biological facilities.

But the best defense would be to eradicate ISIS and other terrorist organizations as soon as possible, or at least to eliminate sanctuaries where they can experiment with and develop increasingly dangerous forms of WMD.