What ISIS Is Trying to Achieve With Its Slick Videos 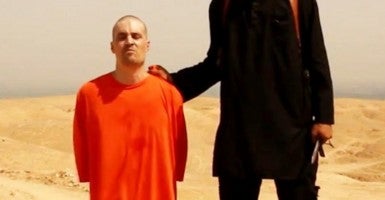 The grisly propaganda videos released by Islamist terrorists of the executions of innocent American hostages are coldly calculated to intimidate the terrorist group’s enemies, inspire its followers and incite further attacks against the United States and our allies.

The Islamic State (formerly known as the Islamic State of Iraq and Syria or ISIS) considers the videos a means of retaliating against the United States for supporting Iraqis who are resisting the group’s barbaric advances.

The videos also are meant to inflate others’ perceptions of ISIS’s strength and to plant the idea that the United States is incapable of halting the slaughter of its own citizens, much less the slaughter of Iraqis and Syrians that ISIS deems to be obstacles to its self-proclaimed jihad (holy war).

The spectacle of ritual killing is meant to dramatize the power of the movement and the helplessness of its victims.

In the video depicting the decapitation of the American reporter Steven Sotloff, the masked terrorist sought to humiliate President Obama personally.”I’m back, Obama,” he crowed, “and I’m back because of your arrogant foreign policy towards the Islamic State.” The gruesome video then shows Sotloff’s severed head lying next to his body.

ISIS aims to horrify Americans to discourage increased U.S. military involvement in combating the Islamic State. But there also was another target audience: supporters and potential recruits for that terrorist movement.

The slickly-packaged jihadist propaganda seeks to stimulate and galvanize members of the movement, spur potential recruits to join in the carnage and incite additional terrorist attacks against the United States.

The spectacle of ritual killing is meant to dramatize the power of the movement and the helplessness of its victims, thereby encouraging fanaticism among its followers. As Eric Hoffer observed in his seminal book, “The True Believer: Thoughts on the Nature of Mass Movements”: “The practice of terror serves the true believer not only to cow and crush his opponents but also to invigorate and intensify his own faith.” The videos also are an important recruiting tool.By displaying a young Muslim militant boldly taunting a superpower, it advertises an intoxicating blend of religious fanaticism and revolutionary violence that attracts impressionable young males.

Unfortunately, in the Middle East, the ruthless employment of violence often is taken as a sign of strength that should be emulated. As Usama bin Laden proclaimed, “When people see a strong horse and a weak horse, by nature they will like the strong horse.”

The Islamic State, an offshoot of bin Laden’s Al Qaeda network, shares his revolutionary Islamist ideology. It sees itself as the vanguard in a never-ending struggle between Islam and non-believers.

Today, the Islamic State is primarily focused on carving a revolutionary Islamic stronghold out of the failed states of Iraq and Syria. But ultimately it seeks to overthrow every government in the region, drive Western influence out of the Middle East, destroy Israel and become the nucleus of a global Islamic empire.

Abu Bakr al-Baghdadi, its ambitious leader, represents a new generation of Al Qaeda leadership that has bristled at criticism of its extreme brutality from old guard leaders such as Ayman al-Zawahiri, bin Laden’s successor.

The Islamic State is primarily focused on carving a revolutionary Islamic stronghold out of the failed states of Iraq and Syria.

Baghdadi recently proclaimed the establishment of a caliphate and renamed himself Caliph Ibrahim.This signals his determination to become recognized not only as the true successor of Usama bin Laden, but more importantly as the successor to the prophet Muhammad.

This claim has been ridiculed by Islamic scholars and rejected by many rival Islamist extremist groups. But it adds a dangerous new dimension to the appeal of the Islamic State that is being amplified by a sophisticated propaganda apparatus that spews high quality media content on a variety of social media that appeal to young Muslims.

Get ready to see more chilling videos from fanatical terrorists seeking to cloak their atrocities with religious justifications.