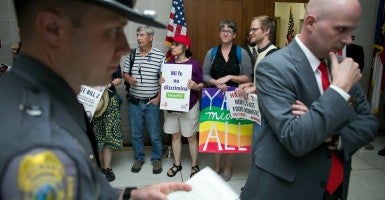 North Carolina conservatives are fighting what they call “bullying” after the Obama administration threatened a lawsuit against the state.

The Justice Department is threatening to sue North Carolina over a law that allows private businesses to set whatever bathroom policies they like for transgender people, but mandates that biological sex will determine access to government bathrooms.

“This is definitely a bully tactic by the Obama administration to push this radical agenda that allows individuals based on the feelings that they have about their biological sex to really trump the privacy rights of the public in the most intimate of places,” state Rep. Chris Millis, a Republican from the 16th District who has been a leading voice in the debate, told The Daily Signal. “It’s absolutely astounding.”

The Justice Department sent a letter to Gov. Pat McCrory, a Republican, on Wednesday, accusing the state of “engaging in a pattern or practice of discrimination against transgender state employees.”

The letter says that under HB2, North Carolina is “in violation of Title VII of the Civil Rights Act.” Title VII prohibits any employer from discriminating against an individual on the basis of sex. Experts disagree on whether Title VII applies to transgender people.

The letter also says that HB2 violates Title IX, which is the federal civil rights law that bans discrimination on the basis of sex in any program that receives federal education dollars. It has also been debated whether or not Title IX applies to transgender students, with courts ruling on both sides.

“This is no longer just a North Carolina issue,” McCrory said on Wednesday. “This impacts every state, every university, and almost every employee in the United States of America.”

“All those,” he added, “will have to comply with new definitions of requirements by the federal government regarding restrooms, locker rooms, and shower facilities in both the private and public sector.”

Unless the state confirms it will “not comply or implement HB2” and notifies all government workers that “they are permitted to access bathrooms and other facilities consistent with their gender identity,” all schools that receive federal education dollars could be at risk of losing that funding.

According to The Charlotte Observer, state public schools received $861 million in federal funding this school year, and the University of North Carolina received $1.4 billion in the 2014-15 school year.

“To use our children and their educational futures as pawns to advance an agenda that will ultimately open those same children up to exploitation at the hands of sexual predators is by far, the sickest example of the depths the Obama administration will stoop to ‘fundamentally transform our nation,'” Lt. Gov. Dan Forest said in a statement after the Justice Department issued its letters.

Millis said the effort on behalf of the Obama administration is “absolutely astounding, and really shows you the length that this current administration will go to push their agenda regardless of who it will harm.”

North Carolina House Speaker Tim Moore, a Republican, told media on Thursday that lawmakers don’t plan on meeting the May 9 deadline issued by the Obama administration to repeal HB2.

Millis said the process of fighting the mandate “could go in multiple different directions.”

HB2, called the Bathroom Privacy Act, took effect on March 23. Lawmakers approved the bill after the city of Charlotte passed an ordinance that allowed individuals to choose public restrooms corresponding with their gender identity, not their biological sex. HB2, also known as the “bathroom bill,” reversed that policy for all government-run facilities, while also prohibiting local governments from adopting any similar protections for lesbians, gays, bisexuals, and transgender people.

Shortly after McCrory signed the bathroom bill into law, entertainers, big businesses, and special interest groups began boycotting the state. The American Civil Liberties Union, along with LGBT advocacy group Lambda Legal, filed a lawsuit, arguing that the law “sends a purposeful message that LGBT people are second-class citizens who are undeserving of the privacy, respect, and protections afforded to others in the state.”

In response to the Justice Department’s Wednesday letter, the American Civil Liberties Union said in a statement, “It is now clearer than ever that this discriminatory law violates civil rights protections and jeopardizes billions of dollars in federal funds for North Carolina,” adding:

Gov. McCrory and the legislators who forced through HB 2 in a single day were warned about these dire consequences, but they ignored the law and the North Carolinians it would harm and passed the bill anyway. The only way to reverse the ongoing damage HB 2 is causing to North Carolina’s people, economy, and reputation is a full repeal.

Tami Fitzgerald, executive director of the conservative North Carolina Values Coalition, which is an advocacy group that supports HB2, said she expects lawmakers to stand firm on their support for the new law.

“I believe this action, on the part of an unpopular, lame duck president, is going to cause our legislature and our governor to dig themselves in deeper,” Fitzgerald said. “I think they’re going to dig their heels in more and be true tar heels because the federal government has no right to try and force a state like North Carolina to do what they’re asking.”

This piece has been corrected to reflect that the Justice Department was threatening to sue North Carolina.