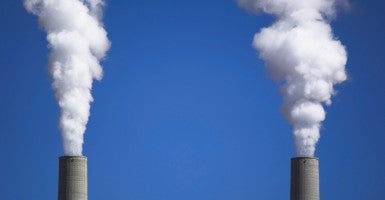 The U.S. Supreme Court on Monday delivered a significant setback to the Obama administration and its environmental plan to curb emissions from power plants.

In a 5-4 decision, the court ruled that the Environmental Protection Agency must consider the financial costs of regulations to power plants.

>>> Commentary: Ruling Against EPA a ‘Victory for Common Sense’

The court’s majority opinion argued that the EPA “unreasonably” deemed the cost of compliance “irrelevant.”

“One would not say that it is even rational, never mind ‘appropriate,’ to impose billions of dollars in economic costs in return for a few dollars in health or environmental benefits,” Justice Antonin Scalia wrote in the court’s majority opinion.

Under the Clean Air Act, the EPA is allowed to regulate power plant emissions if regulations are “appropriate and necessary.”

In 2012, the agency finalized the Mercury and Air Toxics Standards, the first national standard to reduce air pollutants from coal and oil-fired power plants.

However, 23 states challenged the EPA’s regulations arguing that the agency failed to take into account the financial burden of the standards.

Initially, the EPA neglected to consider the compliance costs for the proposed standards, arguing that the regulations were “appropriate” because the emissions posed a risk to the environment and human health.

As the rule approached finalization, the EPA estimated it would cost the industry $9.6 billion annually.

“The agency acted well within the authority in declining to consider costs at the opening bell of the regulatory process given that it would do so in every round thereafter.”

Nick Loris, an energy expert at The Heritage Foundation, argues that the lack of cost-benefit analyses in the EPA’s regulatory process is troublesome.

“The Supreme Court’s decision is a clear demonstration that unelected regulators have gone too far and serves as an important reminder that the agency’s regulation is all cost and no benefit.”

The case will now return back to the lower courts, offering the EPA an opportunity to consider costs of the rule.