Supreme Court Decision Against EPA a ‘Victory for Common Sense’ 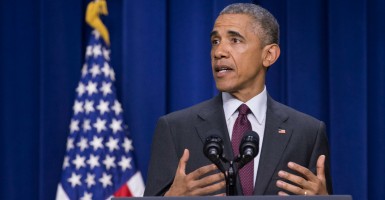 Today, the Supreme Court in Michigan v. EPA held that the Environmental Protection Agency improperly ignored costs when it decided to regulate hazardous air pollutants from power plants. The court, in this 5-4 opinion, struck down this extremely costly rule, known as Utility MACT or Mercury and Air Toxics Standards (MATS).

Justice Antonin Scalia, writing for the majority, explained, “[a]gainst the backdrop of this established administrative practice [consideration of cost], it is unreasonable to read an instruction to an administrative agency to determine whether ‘regulation is appropriate and necessary’ as an invitation to ignore costs.”

The EPA was going to ignore an astonishing amount of costs. The EPA estimated the costs to be $9.6 billion annually. This compared to benefits of $4 million to $6 million annually. As pointed out by Scalia, “[t]he costs to power plants were thus between 1,600 and 2,400 times as great as the quantifiable benefits from reduced emissions of hazardous air pollutants.” As the court succinctly explained, “[n]o regulation is ‘appropriate’ if it does significantly more harm than good.”

The EPA claimed that there were ancillary benefits, anywhere from $37 billion to $90 billion per year. These alleged ancillary benefits included reductions in particulate matter and sulfur dioxide emissions from power plants, both regulated under a different section of the Clean Air Act (not Section 112). The agency didn’t take these benefits into account when deciding to regulate. In fact, the EPA’s regulatory impact analysis didn’t play a role in determining whether it was “appropriate and necessary” to regulate.

Courts often give significant deference to agencies and their interpretation of statutes. Instead of performing the proper judicial role of analyzing whether an agency in fact has authority to regulate under a statute, courts merely review the agency’s interpretation of a statute and determine if it is reasonable. This type of inappropriate deference is a critical reason why agencies have so much power. Justice Clarence Thomas does an excellent job of discussing the constitutional limitations of such deference in his concurring opinion.

Even applying deference, the court still struck down the regulation, arguing that the EPA went beyond the bounds of a reasonable interpretation when it interpreted Section 112 “to mean that it could ignore cost when deciding whether to regulate power plants.”

This opinion is certainly an important victory for common sense. However, unless Congress takes action to address EPA’s abuses and to rein in the excessive power that Congress itself delegated to the EPA, there will be many more lawsuits in the foreseeable future, and the results may be far less favorable.