Obama’s Radical Decision to Cozy Up to a Brutal Dictatorship 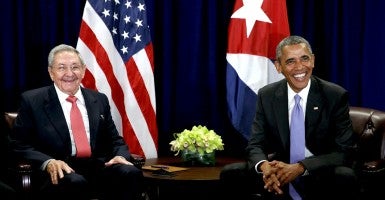 Between calls for comity and lamentations over bitter partisanship, Barack Obama does the darnedest, most divisive things. Take his upcoming visit to Cuba, home of a communist, military dictatorship that remains unrepentantly anti-American.

The newspaper Granma, is telling the captive population on the island that President Obama’s visit proves that there are no human rights violation in Cuba.

Cozying up to a brutal regime is a radical, in-your-face action. It’s being done unilaterally, without regard to the will of Congress.

Most Americans prize their freedom and, all things being equal, would like others around the world to also be free. Yet extending the hand of friendship to the Castro dictatorship will be a setback for those who hoped for a transition to democracy on the island.

Already, the mouthpiece of the Cuban Communist Party, the newspaper Granma, is telling the captive population on the island that President Obama’s visit proves that there are no human rights violation in Cuba. Granma habitually lies to the Cuban people, who have no other recourse as all newspapers are state-owned, but sadly the party organ has it one quarter right this time: the visit obviously proves that human rights violations do not matter to our president.

Many conservatives thus will be offended by a presidential photo-op with the regime leaders—especially the military dictator Raul Castro and his perennially dying elder brother, Fidel. And offense is in order. The Castros, after all, urged the Soviet Union to launch a pre-emptive nuclear strike against New York during the Cuban Missile Crisis. “The victory of socialism is well worth millions of atomic victims,” boasted their comrade Che Guevara.

Nor are these transgressions in the past. Just two years ago, the Castro regime helped North Korea evade UN weapons sanctions.

But none of that seems to faze Barack Obama. He appears to revel in offending conservative Americans (those rubes who “cling to their guns and religion” as he once delighted in saying). Yet he’s shocked, shocked when the rubes don’t give him whatever he wants. He looks hurt, for instance, when Senate leaders tell him that, no, they’re not going to let him fill a Supreme Court vacancy near the end of his term, when he has one foot out of the White House.

All that the Senate leaders are saying is that they will let the American people decide—something the oppressed people of Cuba never have a chance to do. But the president, who as senator wanted to filibuster the appointment of Justice Samuel Alito, now insists that it is his right to install the justice he wants, when he wants to.

The president has already done all he legally can in re-establishing diplomatic relations with Havana. He is limited by law from ending the embargo—a step solely within the purview of the Congress. That makes the visit to Cuba symbolic.

And conservatives should welcome the symbolism. That photo with one or both of the Castros should be the one by which the Obama presidency is remembered.

To the surprise of nobody, the president said this week in San Francisco that he would remain “very active in the public life of this country” after leaving office. Nobody really thought that the quiet dignity of George W. Bush would be right for this president.

Since he intends to continue to weigh in on the important issues of the day, the photo with the tormentors of 11 million Cubans, in Havana, should serve as a salutary reminder of his time in office, just as iconic as President Richard Nixon’s trip to the city we then knew as Peking.

Lastly, he also forgets (but we shouldn’t) that when running for office in Miami in 2008, Obama had this to say:

I will maintain the embargo…. It provides us with the leverage to present the regime with clear choice. If you take significant steps towards democracy, beginning with with the freeing of all political prisoners, we will take steps to begin normalizing relations.

My policy towards Cuba will be guided by one word: liberty. The road to freedom for all Cubans must begin with justice for Cuba’s political prisoners, the right of free speech, a free press, freedom of assembly, and it must lead to elections that are free and fair. That is my commitment.

On Thursday, after the president announced his visit, I reached Antonio Rodiles on the phone. A Cuban dissident leader, Rodiles bemoaned the fact that Obama is going to Cuba “without any pre-conditions,” despite the clear promises made in Miami. He’s also wary of White House promises that the president will meet with dissidents in Havana, “just as in Panama.” But, Rodiles notes that the only “dissidents” Obama during last year’s Summit of the Americas in Panama were pro-Castro “dissidents,” hand-picked by the regime.

Rodiles thinks it far more likely that Obama will spend his time in Havana touring the baseball stadium, since the presidential visit just happens to coincide with a match there between the Cuban National Team and the Tampa Bay Rays. “Obama will probably throw the first pitch. It will be a show,” Rodiles told me.

It looks like Cuba’s dissidents know how to read Obama pretty well. Let’s hope our Senate does, too.