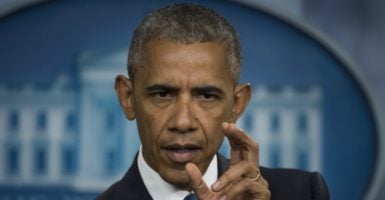 President Barack Obama said the Supreme Court decision halting his executive actions to grant amnesty to illegal immigrants won’t discourage him from making other such moves without going through Congress.

“It does not have any impact from our perspective on the host of other issues we are working on because each one of these issues has a different analysis and is based on different statutes and different interpretations of our authority,” Obama said in the White House briefing room Thursday.

The president cited climate change as an example, saying his participation in related international efforts doesn’t involve the same principle as his executive amnesty, namely “a theory of prosecutorial discretion that in the past every other president has exercised.”

Rather, Obama said, his climate change agenda is “based on the Clean Air Act, the EPA and previous Supreme Court rulings.”

The Supreme Court’s deadlocked 4-4 decision announced earlier in the day lets stand an appeals court decision upholding an injunction against the Obama administration actions in November 2014 to shield up to 5 million illegal immigrants from deportation and allow them to work here legally.

“On the specifics of immigration, I don’t anticipate that there are any additional executive actions that we can take,” Obama told reporters.  “We can implement what we’ve already put in place that has not already been affected by this decision.”

“We have to follow now what has been ruled on in the Fifth Circuit because our Supreme Court could not resolve the issue and we are going to have to abide by that ruling until an election and a confirmation of a ninth justice of the Supreme Court so that they can break this tie,” he said, “because we’ve always said we are going to do what we can lawfully through executive action.”

Obama has used executive actions on other high-profile issues such as gun control, the environment, transgender policy in schools, and his own health care law. Such moves prompted Republican members of Congress to question whether the president has the authority to act in such ways.

While the president may be correct that the Supreme Court decision has no legal bearing on other executive actions, he should not feel more comfortable in acting without Congress, said Elizabeth Slattery, a legal fellow in the Center for Legal and Judicial Studies at The Heritage Foundation.

“He certainly shouldn’t feel emboldened to take even broader authority,” Slattery told The Daily Signal in a phone interview.

Slattery said she believes the president is on shaky legal ground in regard to executive actions.

“The president has an abysmal record in the Supreme Court. He lost 9-0, with his own court appointees ruling against him,” Slattery said, referring to a case in which the court rejected Obama’s attempts to make a so-called recess appointment to the National Labor Relations Review Board when the Senate actually was not in recess.

“That’s not how the Constitution works,” she said.

“Today, Article I of the Constitution was vindicated,” Ryan, R-Wis., said in a formal statement. “The Supreme Court’s ruling makes the president’s executive action on immigration null and void. The Constitution is clear: The president is not permitted to write laws—only Congress is. This is another major victory in our fight to restore the separation of powers.”

In March, the Republican-controlled House voted to authorize Ryan to file a brief in support of the 26 states in the immigration case.

Obama dismissed the Supreme Court’s tie vote and used it to underline his own frustrated attempt to fill the seat of Justice Antonin Scalia, who died in February.

“The Supreme Court wasn’t definitive one way or the other on this,” Obama said. “The problem is they don’t have a ninth justice. So, that will continue to be a problem. With respect to Republicans, what it tells you is, if you keep on blocking judges from getting on the bench then courts can’t issue decisions. What that means is you’re going to have the status quo frozen.”