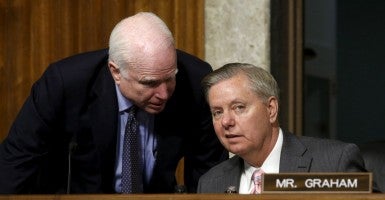 Graham, a Republican nominee for president, was joined by Sen. John McCain, R-Ariz.

McCain was the Republican Party’s presidential nominee in 2008, and he won the New Hampshire primary during both of his presidential campaigns in 2000 and 2008.

“I believe that this election will have more to do with the security of this nation than any election since 1980,” McCain said. McCain said that the world is in “turmoil” due to the president’s “feckless foreign policy” of “leading from behind.”

Meanwhile, Graham, R-S.C. reiterated his opposition to the president’s nuclear agreement with Iran. “This deal is a bad deal,” Graham said. “For us, for Israel, and everybody else.”

Graham said he believes there is a “perfect storm brewing,” creating circumstances in which the United States might be attacked: “A weak president, a dysfunctional Congress, an emboldened enemy, a war-weary public and a military being gutted.”

He said it would be a “marriage from hell” to allow a “radical Islamic nation or organization” to have “a weapon of mass destruction.”

McCain added that the president set up a “straw man” argument when he told the American people that the deal was the only way to prevent war.

Both senators said the deal should be rejected by Congress, and that the next president shouldn’t uphold the terms of the deal.