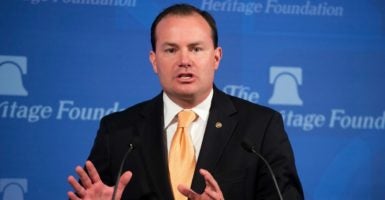 In the four weeks since President Donald Trump was inaugurated, congressional lawmakers have moved to address some of the 22,700 regulations adopted under President Barack Obama.

“There has not been nearly as much attention paid to this issue as there should have been,” Sen. Mike Lee, R-Utah, told The Daily Signal in a phone interview. “I think President [Ronald] Reagan focused on this and I think President Trump is focusing more on this issue than any other president since Reagan.”

The tool Congress is using to undo these regulations is known as the Congressional Review Act, which allows it to repeal executive branch regulations.

Three resolutions disapproving of Obama-era regulations have been adopted by both the House and Senate since Trump’s inauguration and 24 more have been introduced in the House, according to James Gattuso, a senior research fellow who studies regulatory policy at The Heritage Foundation.

On Wednesday, the Senate adopted a resolution by a margin of 57-43 disapproving a regulation finalized during Obama’s last weeks in office that would “prevent some Americans with disabilities from purchasing or possessing firearms based on their decision to seek Social Security benefits.”

Senate Judiciary Committee Chairman Sen. Chuck Grassley, R-Iowa, said in a prepared floor statement on Wednesday that this resolution of disapproval included 32 bipartisan co-sponsors in the Senate and was supported by a myriad of civil rights groups and disability organizations.

“Repealing this regulation will ensure that disabled citizens’ Second Amendment rights are protected,” Grassley’s statement said. “Those rights will no longer be able to be revoked without a hearing and without due process. It will take more than the personal opinion of a bureaucrat.”

Paul Larkin, a senior legal research fellow at The Heritage Foundation, told The Daily Signal in an email that “Congress is moving expeditiously to invalidate rules that never should have been adopted.”

“This will lift the burdens felt by the average person from needless rules,” Larkin added.

“ … Once Congress passes a joint resolution of disapproval and the president signs it into law, the rule is nullified and the agency cannot adopt a ‘substantially similar’ rule absent an intervening act of Congress,” Larkin wrote in a commentary article.

Passed in 1996 in concert with the Small Business Regulatory Enforcement Fairness Act and then-Speaker Newt Gingrich’s Contract with America reform agenda, the Congressional Review Act, according to the Congressional Research Service, “is an oversight tool that Congress may use to overturn a rule issued by a federal agency.”

Until this year, the Congressional Review Act had been used successfully only once in 2001 to repeal a regulation created during the Clinton administration pertaining to the Occupational Safety and Health Administration.

However, with a Republican House, Senate, and White House, conservative lawmakers have the votes needed to adopt the joint resolutions of disapproval for each regulation and a president who will sign them.

On Tuesday, Trump signed a resolution reversing “[a] costly regulation that threatened to put domestic extraction companies and their employees at an unfair disadvantage,” according to the Office of the Press Secretary.

Repealing the domestic extraction regulation that Trump signed Tuesday “could save American businesses as much as $600 million annually,” according to the office.

“During the final months of President Obama’s presidency, during what some refer to as the ‘midnight period,’ unelected bureaucrats in the executive branch were very busy and they issued a flurry of regulations,” Lee said. “ And, it is significant that those regulations will impose … billion[s] [of dollars] … in compliance costs on the American people.”

“The successful use of the [Congressional Review Act] is not only good for the balance of powers, it’s good for American businesses, our economy, and a positive development for any American seeking to live their life with minimal government intrusion,” Bovard said in an email to The Daily Signal.

Trump is also expected to sign another joint resolution of disapproval, which undoes a rule “that would establish onerous requirements for coal mining operations, and impose significant compliance burdens on America’s coal production.”

Bovard said the Congressional Review Act is the ideal tool to bring accountability back to governing.

“The use of the Congressional Review Act is a welcome act by Congress to assert itself as a co-equal branch of government,” Bovard said. “Unelected bureaucrats should not write laws—and it’s up to Congress, through the use of the CRA, to disprove regulations that were not written as Congress intended.”

Gattuso said the timing for repealing regulations imposed by Obama is ripe for leaders in Congress.

“After 20 years of almost complete disuse, the stars have aligned to make the [Congressional Review Act] the vehicle of choice by members of Congress wanting to roll back recent Obama regulations,” Gattuso said in an email to The Daily Signal.