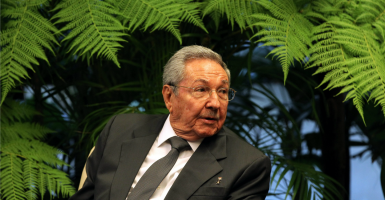 It can be painful watching President Obama strike deals with some of the world’s most odious regimes. But as the spotlight of misguided diplomacy shines on these pariah states, it gives those who actually care about human rights a chance to educate onlookers about what life is really like for those beneath the boots of the Castros and the Mullahs.

Education is key, as was illustrated by a much-ballyhooed push poll by the Atlantic Council in February last year, which showed wide support for engagement with Cuba. However, once the question included information on how horrible Cuba’s human rights record was, support quickly dropped from 56 percent to a minority of 43 percent.

Iran, because of the memories of the hostage crisis and its ritualistic “Death to America” chants, is well-known as a U.S. foe. Many Americans realize that Iran is no friend of gay rights, and some may know that, under the regime, homosexual acts are punishable by death.

But how many Americans know that Iran’s clerics can and do routinely push gays into unwanted sex-change operations? Or that the regime that may soon reap $300 billion to $400 billion in sanctions relief from the Vienna nuclear deal is the world’s largest state sponsor of terrorism? Tehran will likely use much of that money to support such proxy groups as Hezbollah, Hamas and a Syrian regime that has massacred over 320,000 of its own people in four years.

Cuba’s human rights violations get even less attention. This is ironic given that, unlike Iran, it lies just 90 miles from our shores and has a history that is deeply interwoven with that of the United States. Cuban soldiers fought in the American Revolutionary War. The U.S. liberated Cuba from Spain in 1898. And, of course, there are close to 2 million Americans of Cuban descent.

And yet, this former friend has been held still in historical aspic for the last 56 years. Ruled by one single, communist clan, its 11 million people have had their civil rights canceled. The island’s crumbling buildings serve as a telling rebuke, reminders of a superior era gone by. Nothing of any architectural significance has been built in half a century. Similarly, the 1950s cars testify that average Cubans in 1959 suddenly became too poor to import new ones. Yet somehow these self-evident facts have failed to generate much reaction from college students.

Democratic and friendly Israel gets all the opprobrium on campus, where there’s a bourgeoning anti-Israeli movement. But Cuba? Crickets.

One plausible explanation is that far too many American students have been educated by a professorial cadre that agrees with the ideology of the Castro clan. Che Guevara enthusiasts in academia even now are racing to form partnerships with Cuba.

So small wonder these professors have spared their charges any instruction on the sadistic nature of their Latin “hero” or anything else that would make them question the reigning orthodoxy (both on campus and in Havana).

But as anyone who’s ever been parent to a teenager can attest, the young like to question authority. Why not use the present moment to give them the information they lack concerning Cuba and Iran? As former White House chief of staff Rahm Emmanuel used to say, “You never want a serious crisis to go to waste.”