How Republicans Lost Control of the Spending Fight in Congress 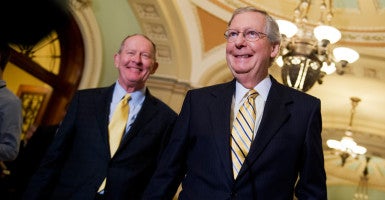 Republicans arrived in Washington this year promising a return to “regular order” in Congress. It was a hallmark of Paul Ryan’s quest to be House speaker and Mitch McConnell’s way of showing that the Senate could get things done.

Gone were the days of omnibus spending bills and continuing resolutions—or the dreaded combination of the two, known as a CRomnibus. In their place would be a budget and 12 spending bills.

But four months into 2016, House Republicans have yet to approve a budget (missing the April 15 deadline) and their Senate counterparts are unable to pass even the least controversial spending bill.

Their earlier promises have given way to the prospect of 2016 being a repeat of the status quo that Americans are rejecting in record numbers this election year. And to make matters worse for conservatives, Republicans are proposing to spend more money and avoiding substantive policy fights.

Not surprisingly, conservatives blame Republican leadership in the House and Senate for losing control of the government spending fight—viewing concessions to President Barack Obama as an abandonment of GOP campaign promises.

Last year, Republicans added the Senate to their control but ended up cutting a deal with Obama to bust the budget caps agreed to in 2011. Now, as Obama’s term draws to a close, GOP leadership would prefer to stick with the higher spending number. Under the leadership of Speaker Paul Ryan, R-Wis., the House missed the April 15 deadline to approve a budget. (Photo: Bill Clark/CQ Roll Call/Newscom)

That number—$1.07 trillion—is $30 billion higher than what conservatives want. Republicans don’t have the votes to pass that $1.07 trillion budget in the House, although they are toying with the idea of a so-called “sidecar” that would make cuts in spending. Leadership sent signals Friday that such a plan might win approval when lawmakers return after a weeklong recess. There’s no guarantee it would ever be enacted, however, giving conservatives pause.

While the House is facing a standstill over its budget, the Senate is charging ahead with a series of appropriations bills that adopt the higher level of spending.

The most recent example comes in the form of the Senate’s energy and water spending bill. It’s the first of 12 spending measures on the docket. The appropriations bill spends $355 million more than what was enacted last year and comes in $261 million higher than Obama’s budget request.

GOP leadership justified the higher spending by saying it conforms to the budget deal that then-Speaker John Boehner, R-Ohio, and Obama struck last fall before Boehner left office. Conservatives stridently opposed the measure in October and remain against it today. As if the higher spending numbers weren’t enough to infuriate conservatives, they also were told their policy riders wouldn’t be included in the underlying bill or considered in committee. Sen. Lamar Alexander, R-Tenn., chairman of the appropriations subcommittee overseeing the energy and water measure, made clear in March that “controversial riders will not be added.”

Republicans who wanted to amend the spending bill would need to do it on the Senate floor—a harder feat to accomplish. And that’s exactly how it played out last week. After adopting eight amendments by voice vote last week, the Senate took roll call votes on nine others.

In one case, Democrats outmaneuvered their GOP colleagues on a measure to block funding for the Environmental Protection Agency’s controversial Waters of the United States rule. Senate Minority Leader Harry Reid, D-Nev., demanded a 60-vote threshold because he said it wasn’t germane to the bill. Republican leadership acquiesced and the amendment failed, even though it had the support of 54 senators, including four Democrats.

“The strategy is designed to let moderate Republicans get on record voting for nominally good conservative policy while still allowing bad liberal policy to move forward,” an aide to a conservative senator explained to The Daily Signal.

Since Republicans took control of the House in 2011, they’ve proposed around $25 trillion in savings. Yet the national debt has gone up by $5.7 trillion.

As the energy and water spending bill moved closer to final passage last week, Sen. Tom Cotton, R-Ark., announced he would introduce an amendment related to the Iran nuclear deal. The move infuriated Democrats, prompting them to filibuster the spending measure.

Now, the GOP is left wondering if Senate Democrats were ever going to make a good-faith effort to pass appropriations bills or if they just wanted to use the process to load them up with liberal policy and more spending. Ultimately, that might work in Democrats’ favor if lawmakers resort to an omnibus spending bill—a scenario that appears more likely.

With the Senate gone for a weeklong recess, it’s unclear if the energy and water appropriations bill—or any that follow—will win the bipartisan approval that Senate Majority Leader McConnell so craves.

Conservatives, meanwhile, are left wondering if that means they’ll once again be presented with a massive bill that spends more money, lacks conservative policy riders, and funds government programs that have proven to be ineffective.

They’ll find out leadership’s next move in about a week. Until then, it’s recess on Capitol Hill.