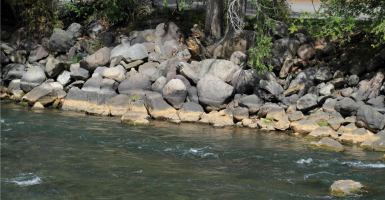 Conservatives want to block an EPA rule that would allow the federal government to limit pollution in the nation’s rivers, lakes, streams, and wetlands. (iStock Photos)

While Senate leaders are hoping to earn final passage on a $37.5 billion energy and water spending bill this week, the legislation lacks amendments pushed by conservatives and boosts spending above President Barack Obama’s budget request.

One of those amendments would have blocked funding for a major Environmental Protection Agency rule. Last week, Senate Republicans fell short of the 60 votes needed to thwart the EPA’s Waters of the United States rule. The vote was 56-42 with four Democrats joining Republicans.

The EPA rule, which has been put on hold by a U.S. appeals court, would allow the federal government to limit pollution in the nation’s rivers, lakes, streams, and wetlands. Conservatives oppose it because they think it would limit economic growth and violate property rights.

If the Senate had passed the amendment, it would have been attached to the fiscal year 2017 energy and water appropriations measure, which funds the U.S. Army Corps of Engineers and Department of Interior. Obama vowed to veto the bill if amendments like this one were adopted.

Senate Majority Leader Mitch McConnell filed for cloture on the energy and water spending bill Monday night. It is the first appropriations the Senate has considered in 2016.

The Kentucky Republican has said repeatedly his top priority for 2016 is to pass all 12 spending bills appropriating money for the different government agencies, and controversial amendments would make that more difficult. McConnell’s goal is to show Republicans can govern in an election year, and to avoid an all-in-one omnibus spending bill that has become the norm in Congress.

So this year, the Senate is proceeding with its appropriations process earlier than normal, with McConnell deciding to move spending bills that abide by last year’s Bipartisan Budget Act, which sets total government discretionary spending at $1.07 trillion.

The $37.5 billion energy and water spending bill adheres to the caps set by the act, which was negotiated by former Speaker John Boehner, R-Ohio, and Obama. It boosts spending by $355 million above fiscal year 2016, including a $1.163 billion increase for the Department of Energy’s defense-related programs, but a $808 million decrease for nondefense areas.

The bill comes in at $261 million above Obama’s budget request.

Conservatives who believe that spending figure is too high believe that attaching amendments—or policy riders—to the spending bills is a way to fulfill priorities such as blocking funding for programs they don’t like.

Indeed, during a hearing last month on the Energy Department’s proposed budget, Sen. Lamar Alexander, R-Tenn, said he wants to pass clean spending bills in which “controversial riders will not be added.” Alexander followed through on that promise as chairman subcommittee overseeing energy and water appropriations.

Senate Democrats, meanwhile, appear willing to go along with the appropriations bills as long as they don’t include amendments supported by conservatives.

Obama “won’t tolerate any poison [p]ill riders; he’ll veto the bill,” Sen. Dick Durbin, D-Ill., told E&E News last week. “As long as he is our backstop, you will have good-conduct medals being given out all around.”

Though McConnell allowed for vote on the Waters of the United States amendment during the floor debate, some conservatives are upset that the measure was not subjected to a lower vote threshold for passage.

Under a legislative process known as cloture, the Senate, with 60 votes, can bring debate on a measure to a close, avoiding a filibuster. Once cloture is invoked, only certain types of amendments may be offered—ones that are germane, or directly related to the underlying bill and issue at hand. If an amendment is considered germane, then the amendment needs only a simple majority to pass.

Don Stewart, a McConnell aide, told The Daily Signal that the Waters of the United States amendment was deemed germane and that it should have been held to a 51-vote threshold, but that Democrats blocked that from happening. With 56 votes, the amendment would have passed under the lower threshold.

“Since Democrats blocked it from being made pending, the entire Senate instead agreed to hold the vote at 60 to ensure it at least got a vote (otherwise there would not have been a vote),” Stewart explained in an email. “In other words, with the unanimous consent of the Senate, the vote was held at a 60-vote threshold rather than being blocked altogether.”

But some conservatives argue McConnell could have used a rule known as “priority of recognition” to override Democrats and act alone to make the Waters of the United States amendment pending, and thus eligible for the lower voting threshold.

Today, the Senate passed a Democrat-backed amendment with the lower simple majority threshold (54-42), increasing spending on wind energy at the Energy Department. At least one conservative aide says Senate leadership could have tried harder to hold the Waters of the United States amendment to that lower threshold.

“It’s a total farce,” an aide to a conservative senator said. “The strategy is designed to let moderate Republicans get on record voting for nominally good conservative policy while still allowing bad liberal policy to move forward. McConnell is letting Democrats decide which amendments need 60 and which don’t.”

Stewart said that McConnell “theoretically” could have used the “priority of recognition” rule, but that Democrats would have blocked cloture on the underlying bill—preventing it from advancing—because they oppose the Waters of the United States amendment.