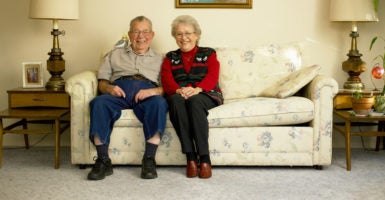 It is not a coincidence that the top five freest economies in the 2019 Index of Economic Freedom have a much greater life expectancy than the bottom five, repressed economies in the index. (Photo: Dennis Wise/Getty Images)

Miguel Pontifis is a member of the Young Leaders Program at The Heritage Foundation.

The Heritage Foundation’s 2019 Index of Economic Freedom has just been released, and once again, greater economic freedom has been shown to increase individual and societal well-being in terms of health outcomes, educational achievement, and clean natural environments.

Life expectancy is an important measure of well-being. The World Health Organization states that the “global average life expectancy increased by 5.5 years between 2000 and 2016, the fastest increase since the 1960s.”

Individuals who graduate from high school are less likely to live in poverty. Education provides individuals with the ability to think critically, acquire valuable skills, and compete more effectively in the marketplace.

A vibrant, free market of widespread choice of education options, unhindered by government control, is the best approach, and it’s only possible with a high degree of economic freedom.

Big-government environmentalists who predict the demise of humanity if we do not hand them the keys to the world economy would be surprised to learn it is economic freedom that better supports a sustainable environment, not government control.

The truth is, countries that endorse economic freedom fare better on life expectancy, education, and on the environment than countries that have an intrusive government.

For 25 years, The Heritage Foundation has measured the level of economic freedom across the world. This year’s Index of Economic Freedom can again provide governments around the world with a road map to counter the forces of economic repression and centralized decision-making.