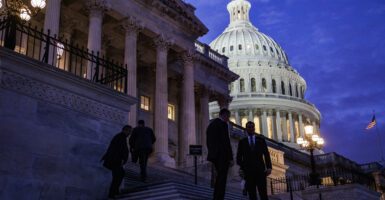 Members of the U.S. House of Representatives confer on the steps to the House chambers on Oct. 28, when House Democrats unveiled an updated version of their social spending package. (Photo: Samuel Corum/Getty Images)

House Democrats unveiled an updated version of their social spending package on Oct. 28. Weighing in at 1,684 pages, and with trillions of dollars in taxing and spending, it is one of the largest legislative proposals in history.

Progressives like Sen. Bernie Sanders, I-Vt., claim that the bill is a compromise. In reality, it is a profoundly radical document that would massively expand federal power, promote a variety of left-wing causes, kneecap the economic recovery, and waste a tremendous amount of taxpayer money.

Here are just nine of the problematic policies in the bill.

The main number mentioned about the bill is the claimed cost of $1.75 trillion in spending and tax credits. For starters, this is only an educated guess on the part of Democrats, since official congressional scorekeepers have not had a chance to weigh in yet.

More importantly, that stated cost (which is not zero) is only possible as a result of deliberate budgetary gimmicks. Many key programs expire after a few years rather than the usual 10 years, and in some cases expire after a single year.

Amazingly, the bill’s cost would more than double without the gimmicking.

This would still be a problem even if all of the programs are allowed to expire. That’s because the bill front-loads the spending while spreading tax hikes across the decade, meaning it would increase deficit spending significantly in the first few years, especially the first year.

In turn, that deficit spending would mean artificially injecting billions of dollars into the economy. This would only serve to worsen the biggest wave of inflation in decades.

Causing hardworking families to pay more for essentials is no way to “build back better.”

2. Using Taxpayer Dollars as a Back Door to Mass Amnesty of Illegal Immigrants

Providing amnesty to illegal immigrants has been a top priority of the left for decades. While the spending package is supposed to be just that—a spending package, not a new immigration law—Democrats are attempting to sneak amnesty through the back door.

Because the bill is written to fit within strict budgetary rules, there are limits to what it can contain. The Senate parliamentarian has ruled against the inappropriate amnesty provision twice already, with the second decision relating to the language that’s in the revised bill.

Democrats have said that the current immigration text is a “placeholder” while they make a third attempt to convince the parliamentarian to give them what they want. The fact that they’re including text that has already been ruled out of order demonstrates how little regard they have for the rules.

Though many programs in the bill were eliminated or cut between the first and second versions, Section 136601 survived intact. That section would direct $10 billion to “environmental justice” programs at colleges and universities.

There’s nothing inherently wrong with a student studying the environment. However, there is every reason to oppose federal funding for “environmental justice”—a blatantly ideological approach to the issue—which would primarily serve to produce legions of left-wing activists.

4. Big Handouts for the Wealthy

While class warfare is a central component of left-wing activism, that apparently doesn’t apply to subsidizing things the left likes.

The bill includes huge tax rebates on the purchase of electric vehicles. Since electrics aren’t cheap, most of their current market is people with six-figure incomes. As such, the tax rebates in the bill are available to households earning up to $800,000 per year, and on vehicles costing up to $74,000.

While the “defund the police” movement has created waves of controversy, the left appears united when it comes to funding one kind of law enforcement: tax cops.

The bill would throw $79 billion taxpayer dollars at the IRS in an attempt to squeeze more revenue from the economy. That’s equivalent to six years of regular spending on the IRS, and it’s done in a way that creates a slush fund for the Treasury secretary to use with wide discretion.

Let’s be clear: The federal government doesn’t have a revenue problem. It brought in a record $4 trillion during the last fiscal year, which would have been enough to deliver a balanced budget if spending was at the level seen as recently as 2017.

We have a spending problem. Federal spending consistently grows much faster than the economy, and this bill would only make the problem worse.

A rare instance of an item increasing from the first version: Section 31048, which would use $50 million (up from $25 million) on “antidiscrimination and bias training” at the Department of Health and Human Services.

The people who work at this department are responsible for managing an expensive range of social benefit programs. Since it’s extremely unlikely that a collection of de facto social workers is a haven of bigotry, the only realistic purpose of the training is far-left indoctrination.

Section 11003 would deliver $2.5 billion for “community tree canopy” and “tree equity,” which is progressive-speak for planting trees in cities.

This might be a worthwhile endeavor for local residents to undertake, but it’s wrong for the federal government to forcibly subsidize urban areas at the expense of rural and suburban areas (and vice versa for other programs). In addition, the environmental benefits will be minuscule compared to the cost of planting on a per-tree basis.

The spending package is primarily concerned with providing benefits to selected interest groups and constituencies, and this program is a perfect example of that.

8. Billions for Push Toward Socialized Housing

One of the largest failed socialist big government experiments of the 20th century was mass scale public housing. Hideous concrete slabs became common in cities across the U.S., Europe, and Soviet Union.

While we eventually moved away from that approach, the bureaucratic urge to centrally plan housing never went away. The new spending package provides billions for a range of such activities, including public housing construction, federally approved housing planning, and paying “fair housing organizations” to do thinly-disguised political activism.

There is room for improvement when it comes to housing policy, but this is absolutely not the right approach.

Why do these species deserve special attention, on top of billions spent on conservation every year?

The answer comes from a 2019 piece of legislation written by Rep. Raul Grijalva, D-Ariz., the chair of the House Committee on Natural Resources. These species were specifically targeted in Grijalva’s bill, which didn’t pass. Since Grijalva oversaw the drafting of this section, he was able to get the earmarks added into the package.

These millions of dollars by themselves would not bankrupt the country. Yet these earmarks demonstrate a disregard for taxpayers that has become all too common in Washington.

Just because the bill uses gimmicks to appear smaller than it was before doesn’t change the fact that it would do great harm to America.