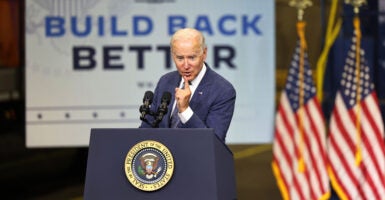 Worse, Transportation Secretary Pete Buttigieg acknowledged that he expects the supply-side issues to persist into next year.

Fox News host Bret Baier pressed Buttigieg on why Democrats are prioritizing the Build Back Better legislation amid the ongoing supply chain crisis.

Buttigieg argued the Build Back Better measure was part of the administration’s strategy to ease supply-side and inflationary pressures. “Part of what’s going on in our economy, part of what’s creating a lot of pressure right now is issues of labor supply. Those get better if, of course, we beat the pandemic and if we make it easier to get by in this country and make work pay.”

If the administration expects Build Back Better to solve supply-side problems, it’s badly misdiagnosing their cause. It is difficult to see how a shortage of truckers and chaos at U.S. ports will be solved with government handouts, green energy giveaways, more regulations, and the largest tax increase in generations.

The proposed tax increases in the Build Back Better bill would be the largest since 1968, when President Lyndon Johnson imposed a temporary income tax surcharge on individuals and corporations. Inflation climbed in 1968 and 1969 while Johnson’s taxes were in effect.

On the other hand, President Ronald Reagan’s 1981 tax cuts—the largest since the advent of the income tax—coincided with inflation plummeting from 10.3% to 3.2% between 1981 and 1983. Sound monetary policy played a critical role in beating back inflation.

However, it’s instructive that Reagan’s critics ridiculed his administration’s more modest projection that inflation would drop to 4.2% over a longer five-year period from 1981 to 1986.

The Build Back Better legislation directs roughly three-quarters of its new taxes at businesses. Including state taxes, many companies would face higher corporate tax rates than they would in any of the other 37 countries in the Organization for Economic Cooperation and Development.

Such a large tax increase on American businesses would send shock waves through the economy. Americans will be left paying higher prices for a smaller amount of goods and services.

Consider a U.S.-based company dealing with supply chain issues. To bolster its supply chain, the company might be considering moving production closer to U.S. consumers, holding more inventory in expanded American warehouses, or investing in new technology that reduces reliance on imports. Alternatively, the company might decide to expand into new foreign markets or simply delay major investments.

How would looming tax increases affect the company’s decision?

The company’s leadership would decide between such options based on a return-on-investment analysis. If the expected after-tax profits are higher overseas, that’s where the company will invest.

If new taxes—or the threat of new taxes—deter the company from producing more in the United States, that means fewer American jobs, depressed wages, and fewer goods available to U.S. consumers.

Similarly, if new taxes deter the company from carrying more inventory, then the amount of goods available to U.S. consumers will fall, and prices will rise.

Technology investments would be especially risky for the company. Many ideas fail to turn into commercial success, regardless of how much money is poured into them. If the company faces all of the downside risk, but taxes claim over half of the upside reward, the company has a strong reason not to invest in new technology.

The same is true for small entrepreneurs.

Technological innovation has driven almost all of the improvement in people’s material standard of living. Because of business and entrepreneurial innovation, most Americans today can afford things that couldn’t be bought for any price at the turn of the 20th century, like air conditioning, modern medicine, and handheld advanced computing.

Perversely, the mere threat of a tax rate increase may be leading some U.S. companies to delay capital investments until after 2021. By putting off certain expenses, companies can recognize more of their taxable income before next year’s expected tax rate hike. That may contribute to weak business investment until after the Christmas shopping season has come and gone.

While there are factors at work besides taxes, it’s notable that net domestic business investment fell 23% between the fourth quarter of 2020 and the second quarter of 2021.

How much upward pressure does the Build Back Better plan put on prices? That depends on how much distortionary spending and new regulation is left in the final package.

For their part, left-wing Democrats in Congress are pushing for enough new spending and government regulation to reshape the role of government in Americans’ lives permanently.

Instead of negotiating with more moderate Democrats to scale back what is included in the bill, some on the left are advocating to keep all proposals intact, but fund them for fewer years.

They expect that if Republicans retake Congress and the White House, they will lack the political resolve to claw back new entitlements.

That argument exposes the budgetary gimmicks already at work in the bill. While the taxes are counted over the 10-year period from 2022 to 2031, most of the social safety net provisions are only funded through 2025. Even now, the Build Back Better social welfare agenda relies on heavy deficit spending to make the math work.

By recklessly adding to the deficit, Build Back Better would push America closer to a reckoning with our large and growing national debt.

When debts and deficits get out of hand, creditors worry and ultimately demand a higher return for the risk they bear. That means interest rates will tend to rise unless the Federal Reserve doubles down on measures that risk future inflation, like buying back its own securities.

With almost $29 trillion of debt, even a 1 percentage point increase in interest rates means trillions of dollars more in interest owed each decade. Unless lawmakers and the Federal Reserve learn restraint, they risk putting the nation through a vicious cycle of more debt, higher interest rates, and soaring inflation.