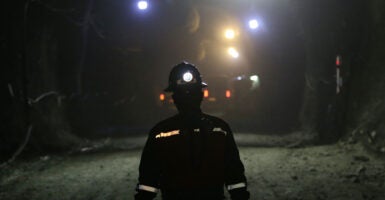 The global post-pandemic economy may be encountering a new commodity price “super cycle” that could result in higher prices for many years to come, especially for copper. Governments should avoid responding to inflation with price controls. Pictured: Miners work in the El Teniente copper mine in the Andes Mountains in Chile. (Photo: Caudio Reyes/AFP/Getty Images)

Cristian Lopez, a recent graduate of Florida International University, is a member of the Young Leaders Program and a research intern in the Center of International Trade and Economics at The Heritage Foundation.

As the worst and most devastating initial economic impact of the global pandemic begins to fade, nations around the world face a number of challenges in rebuilding their economies. One of them is the specter of greater inflation.

As a component of the monetary freedom score in the Index of Economic Freedom, higher inflation will weaken that score and have a dampening effect on economic freedom.

With lockdowns ending and more people and businesses normalizing, demand for commodities has increased. So have their prices. There is plenty of cheap money in many countries chasing still relatively scarce, COVID-19-impacted supplies of commodities. Sectoral inflation is the result.

Reuters reports that 52 “out of 63 commodities monitored by the World Bank were up in price in December 2020 compared with the same month a year earlier.” Commodities such as “energy (coal and gas); agricultural products (tea, coconut oil, palm oil, fish meal, rice, citrus fruits, sugar, logs and rubber); fertilizers; and industrial metals (copper, lead, nickel, tin and zinc).”

Randy Brown, writing in Forbes, reports that the global post-pandemic economy may be encountering a new commodity price “super cycle” that could result in higher prices for many years to come. Copper, in particular, is “essential for batteries, electric cars, solar panels, wind turbines, and 5G solutions. It is also the lifeline for connecting renewable energy to the grid.”

As such, demand for copper is rising, along with its price. Bloomberg recently cited sources predicting that the metal could reach the all-time high of $10,000 per metric ton in 2021.

While that will be good news for Chile and other copper-producing countries, it may deliver a global economic gut punch reminiscent of the oil supply shocks of the 1970s. The ultimate impact on the economy, however, will depend on how recent commodity prices ultimately filter through to consumer prices.

In the medium to long term, a trend of steadily increasing inflation will take a toll on both producers and consumers. The United States and much of the world has benefitted from relatively low inflation since the early 1980s, when President Ronald Reagan and then-Federal Reserve Chairman Paul Volcker implemented economically (and politically) painful measures to “break the back” of the cycle of high inflation that emanated from the oil price shocks of the 1970s.

That set the stage for the remarkable economic growth that resulted during the next several decades. It also contributed to greater economic freedom.

As the Index of Economic Freedom notes, higher scores on the monetary freedom indicator require a stable currency and market-determined prices. Without it, the creation of long-term value or private capital formation is difficult.

That score is calculated using inflation data from the International Monetary Fund, adjusted by a price control penalty.

As inflation ramps up around the world, that index indicator score will fall. Since many governments introduce price controls in response to inflation (e.g., for food and energy), those controls will drive down the monetary freedom score further.

The only way for governments to avoid the stagnating rates of economic growth that usually result from higher inflation (i.e., “stagflation”) will be to institute the tough policies of Reagan and Volcker. If moderate to galloping inflation were to set in, governments would need to stop printing money and stop running budget deficits financed by more borrowing.

Will they do it? The healthy recovery of the world’s economy depends upon it.