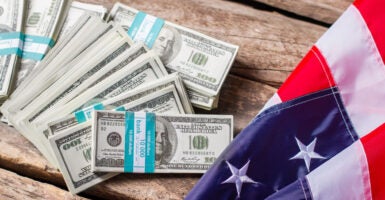 If you’ve watched any of this summer’s Olympic Games, you’ve likely marveled at the tremendous speed, strength, and precision of the world’s best athletes.

It can be hard to grasp just how fast, strong, and agile these Olympians are. If you’ve ever run on a treadmill—probably in the 6- to 7-mph range—consider setting the treadmill to 13 mph and running for 26.2 straight miles.

Perhaps you’ve done a flip on a large and cushy trampoline. Now imagine doing that same flip on a solid and unforgiving 4-inch beam. Or picture yourself throwing a bowling ball across the length of a tennis court.

Yet it’s easier to imagine all of that than to grasp the enormity of the U.S. federal debt and our government’s recent spending spree. It’s almost incomprehensible, at least without a little perspective.

Take this past year.

Most Americans realize the federal government spent a lot of money, including three rounds of so-called stimulus payments that most households received. But those $3,200 worth of individual checks pale in comparison to total spending.

As of 2021, the U.S. debt comes out to roughly $220,000 per household. That’s enough to buy about eight years’ worth of groceries, gas, clothing, and housing for the typical household.

And even that figure doesn’t include the unfunded liabilities of Social Security and Medicare. Without a significant reduction in the size of those programs, each household’s total debt is actually over $660,000. That’s equal to the cost of a median family home, a new car, plus over five years’ worth of a typical household’s income.

However, even this massive a debt doesn’t seem all that bad. Interest rates are low, and the federal government has had little problem seemingly borrowing into oblivion without consequence. (The same could be said of Greece before a financial crisis ensued.)

And that’s the equivalent of an interest-only mortgage. Those costs don’t even begin to reduce the principal amount of debt.

While ordinary Americans aren’t allowed to take out mortgages or open up new credit cards in their children’s names, the federal government does this every day.

The share of debt for a child born this year was $66,874. And that debt is on track to rise every year, reaching $111,552 by the time the child is 18 and either starts working or heads off to college. It will then hit $191,768 by the time that person is 30 and potentially raising young children.

Fortunately, it’s not too late to prevent the nation from going broke.

A cornerstone of success for Olympians is personal responsibility. Years of consistent training, healthy food, and vigorous exercise combine to give athletes the physical and mental tools they need to rise to the top.

A similar mindset can work for the nation’s financial woes.

Olympians build a strong work ethic to maximize their progress. Congress should stop shirking responsibilities by placing an increasing amount of federal spending on autopilot and instead seek to reform programs like Social Security and Medicare that are on a path to bankruptcy.

Olympic medalists know how to prioritize what will get them to the podium. Congress should focus on core federal responsibilities and clear away countless programs that benefit narrow interest groups at the expense of the public good.

Iconic champions focus on the long game, learning from their mistakes and making the changes necessary to stay on top. Congress should recognize our looming debt disaster and step away from shortsighted spending plans.

Big problems like the unsustainable national debt won’t be solved quickly or easily. However, in the same way that Olympic athletes reach new heights through steady improvement and healthy choices, Congress must begin to take fiscal responsibility seriously as soon as possible.

Otherwise, a Greece-like fate may await us.